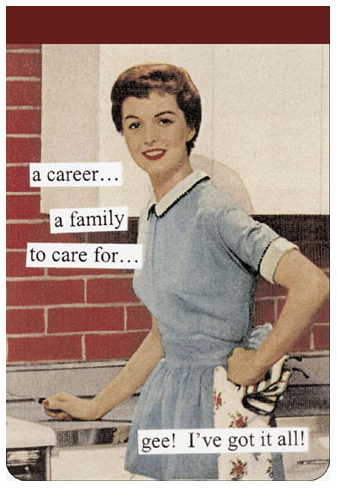 Don’t You Try to Tell Me Where I Belong!

Where do women belong, in the home or at the office? That’s the question of the latest debate at The Economist. Linda Basch, President of the National Council for Research on Women appeals to economic considerations:  much of the economic growth in America in recent decades is attributable to women entering the labor force, and (as I noted last week at IWF) embracing women’s talents generally makes businesses more competitive. Her arguments are the same arguments I've made before, but sadly, Basch follows them up with a call for federal support for child care services. Christina Hoff Sommers – a name that should be familiar to regular IWF readers – counters with a slam-dunk statement: “Women do not have an assigned place.” Rather, Sommers argues, women choose to be at the office or at home, and these preferences are the basis behind the pervasive gender wage gap.

Though I'm sympathetic to the "women are awesome, we should run more businesses" argument, in the end, I agree with Sommers: Nobody tells me where my assigned place is. (I also award two bonus points for creative use of the term “matronizing”). As Charlotte wrote in her comments, “We do not believe in a one-size-fits-all approach for women’s lives, and we reject the straightjacket that some of our counterparts advocate.”  While mainstream feminists are likely to interpret Sommers as defending the status quo, nowhere in her statement does Sommers suggest that women really do belong in the home. Instead, she argues (as we at IWF do) that people make choices, and individuals in relationships negotiate their choices regarding domestic and professional workloads.

Indeed, many women choose to work fewer hours, or accept jobs in lower-paid professions – in short, they choose to live according to more "traditional," 1950s-era marriage norms. (Also, as Carrie pointed out, questions can be raised regarding the economic value of the flex-time administrative jobs that many working moms choose, vs. the value of good parenting). However, just because such arrangements are freely-chosen doesn't make them automatically immune to critique. Where Basch and others of her ilk go wrong is the focus on fighting this discrepancy by influencing public policy – in this case, state support for child and elder care. Instead, modern feminism, concerned as it is with workplace and paycheck parity, should be trying to influence those cultural norms that govern the domestic workload of modern companionate (heterosexual) marriage. They should embrace stay-at-home/work-from-home fatherhood, or communicate to single women that they need to demand equal responsibilities for child-care from their future spouses – Sheryl Sandberg’s rule of “make your partner a partner.”

Insofar as there is a gender discrepancy in the workforce, it is not a sign of a market failure requiring any government correction (and certainly not a middle-class child-care entitlement program). If the feminist movement wants to increase equality and eliminate the gender pay gap, it should work on influencing cultural norms, instead of politicizing them.