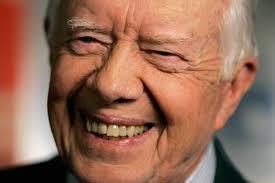 All us oppressed women can take heart: come March former president Jimmy Carter is going to be “speaking up for women.”

Simon & Shuster announced Tuesday that the former president's "A Call To Action: Women, Religion, Violence, and Power" will be published March 25.

The publisher says Carter will draw upon personal observations from his worldwide travels as he condemns abuses of women and girls and the alleged distortions of religious texts cited as justification.

The 89-year-old has written a wide range of books since leaving office in 1981, from memoirs and poetry to a controversial work on the Middle East, "Palestine: Peace Not Apartheid."

I am hoping that the Baptist layman, who taught Sunday school while in Washington, will be speaking up for the rights of women in countries where there is a real war on women. But I have this sinking feeling that won’t be the case.

It  will be fascinating to see what, if anything, the former president has to say about the current administration's war on the Little Sisters of the Poor, whose suit against the administration is now before the Supreme Court.