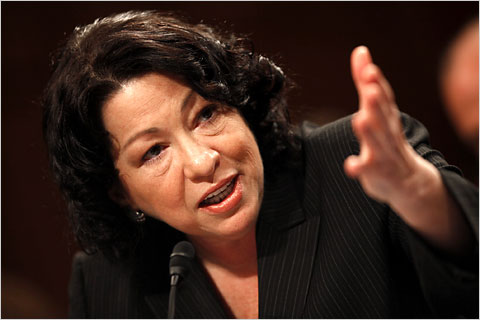 Should some Americans have to pay a stiff penalty to avoid doing something that will violate their religious tenets?

Justices Sonia Sotomayor and Elena Kagan yesterday indicated that this might be the case during oral arguments (transcript here) before the Supreme Court in the Hobby Lobby lawsuit.

Hobby Lobby, an arts and crafts business founded and owned by evangelical Christians, doesn’t want to pay for certain kinds of contraception, as mandated by the Health and Human Services Department.

Hobby Lobby, it should be noted, is fine with paying for most kinds of contraception, but the owners say it would violate their religious beliefs to pay for those that can function as abortafacients.

As reported by CNS News, here is the segment of from yesterday’s oral arguments in the Hobby Lobby case that leapt out for me:

Sotomayor said during the presentation by attorney Paul Clement, who represents Hobby Lobby Stores and Conestoga Wood Specialties, two companies that sued the federal government over the requirement that businesses provide health insurance plans that cover contraceptives, including abortion-inducing drugs.

Clement said Hobby Lobby would pay more than $500 million per year in penalties, but Kagan disagreed.

So Hobby Lobby should just cancel health insurance policies for its employees, pay a fine, and send the employees to ObamaCare, which, I understand, is hurting for customers anyway.

Fine. But what about religious liberty?

Ruth Marcus, who believes that a ruling in favor of Hobby Lobby would be “terrifying,” stated this morning in the Washington Post the left’s chief argument for rejecting the religious liberty claims of Hobby Lobby:

In the context of talking about limits on free speech, it’s common to say that your freedom to swing your fist ends where my nose begins.

That seems like a sensible way to think about the freedom of religion case just argued before the Supreme Court: whether employers can be required to pay for contraceptive methods that would violate their religious convictions.

Most disputes about religious freedom are bilateral — with the government on one side and the individual claiming infringement of religious liberty on the other.

But nobody is going to—indeed wants to—infringe on the rights of Hobby Lobby employees to use contraception. If they would like contraception, they will have access to a variety of low-cost options. That is not the issue. There is a difference in refusing to pay for something because of religious scruples and blocking others from having access to that something.

Justice Sotomayor made the same mistake in logic that Marcus makes. The Wall Street Journal critiqued Sotoyamor's logic in an editorial today:

Liberal Justices rolled out a parade of dubious hypotheticals, arguing that if a business can invoke religion to refuse to pay for abortifacients, couldn't it also refuse to pay for blood transfusions or vaccinations? "Could an employer preclude the use of those items as well?" asked Justice Sonia Sotomayor in the day's first question.

Yet no one is "precluding" anything. Contraception is cheap, plentiful and covered by most health plans. Most corporations are run for profit, not piety. Mr. Verrilli claimed the mandate is necessary to promote public health and gender equality, but HHS could have aided those goals without forcing a minority of business owners with moral aims to implicate themselves in what they consider to be grave moral wrongs.

It would have been relatively easy for the Obama administration to have avoided the Hobby Lobby lawsuit. After all, the administration has repeatedly created loopholes, delays and exemptions to the Affordable Care Act. So why not Hobby Lobby?

Sadly, I must agree with Rich Lowry:

The truth is that the Obama administration wants to bring Hobby Lobby to heel as a matter of principle. In its pinched view of religion, faith should be limited as much as possible to the pews. In its attenuated regard for civil society, it believes government should overawe any person, business, or institution whose beliefs run counter to officially sanctioned attitudes.

If the Supreme Court rules against Hobby Lobby, Americans will have to pay a penalty for living out their religious views.  While this has been common enough in history, it will be new, unprecedented and, to borrow a word from Ms. Marcus, terrifying if this becomes the practice in the United States.

By the way, the scene at the Supreme Court yesterday was ugly.