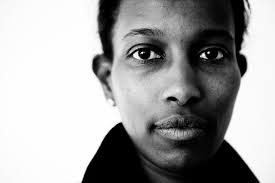 Finally! A Liberal Woman Stands Up for Ayaan Hirsi Ali

Lead of the Day:

War on women alert: One of the most forceful fighters against misogyny in the modern era is under attack.

We’ve already noted on Inkwell that many who call themselves advocates for women remained silent when Brandeis University, under pressure from the combined forces of Islamic extremism and political correctness, rescinded an invitation to the courageous Ayaan Hirsi Ali to speak at Brandeis and to receive  an honorary degree. (See "Who's NOT Speaking Up for Ayaan Hirsi Ali?")

Fox’s liberal commentator Kirsten Powers doesn’t fall into that category. She has written an eloquent column this morning on Hirsi Ali. Powers notes:

Despite being a supporter of abortion rights, an atheist, and an advocate of gay and women's rights, she is despised by many who claim to be defenders of women's rights. Over the years, they have worked to delegitimize her in the hopes that she will be silenced.

The latest effort was a successful campaign to pressure Brandeis University into withdrawing its offer of an honorary degree. Her offense? Expressing the wrong opinions.

In reviewing her book, Nomad, Nicholas Kristof lamented that, "Hirsi Ali denounces Islam with a ferocity that I find strident. … Her memoir suggests that she never quite outgrew her rebellious teenager phase." Yes, if only she would be more demure in describing her own oppression. Guardian columnist Emma Brockes complained that in criticizing Islam, Hirsi Ali "is startlingly direct" and is "deliberately, almost narcissistically provocative."

I urge you to read Powers’ column, which details some of Hirsi Ali's travails with Islamic misogyny, including genital mutilation as a child. She lives under a fatwa.

You might also enjoy what Mark Steyn has to say about the “wretched, jelly-spined nothing eunuchs of Brandeis.” Steyn recognizes in a shameful attempt to shutdown free speech by the left and Islamic extremists. In the case of Brandeis, they scored big time.