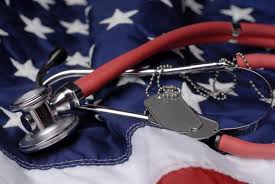 As with most things that happen on our planet, our narcissistic President Barack Obama thinks it’s all about him: the VA scandal is no exception. Taking care of veterans has been one of the “causes of my presidency.” Why, he’s talked about this concern for our fighting men and women since being a candidate in 2008.

But—then again—this VA mess isn't about him at all. It’s about all those other inconsiderate presidents who came before Barack Obama.

The headline on the White House Dossier story perfectly summed up the president's presser yesterday to talk about the VA scandal:

A somewhat bedraggled and not particularly angry-looking President Obama took to the briefing room today to attempt to shirk blame for the burgeoning VA scandal, saying the problem began before him and touting the “progress” he has made fixing the various messes littering the agency. …

Obama of course asked George W. Bush and every other president to share in the blame, and suggested he was trying to fix their mess.

A particularly low blow: he referred to a “decade of war.” Well, we know whose fault that is!

But President Obama hasn’t fixed the mess at the VA. It has grown worse under his governance.  As Victor Davis Hanson points out, when news of the scandalous conditions at Walter Reed Army Medical Center broke during the George W. Bush administration, Bush took immediate action, and people lost their jobs. Obama seemed strangely passive yesterday. We are left with the sinking feeling that the VA scandal will follow the trajectory of other Obama era scandals: initial outrage, promises to get to the bottom of things and hold somebody accountable and then…nothing.

In the case of the VA this passivity is puzzling. With regard to Benghazi, it is likely that the administration had at the very least its own incompetence to hide. With the IRS scandal, it must be admitted that many of the administration’s allies basically would like to ruin the tea party, even if it means using the IRS in a Nixonian fashion.

But the VA? Heads could roll at the VA without angering Democratics, with the possible exception of one head. Eric Shinseki earned creds with the left by attacking George W. Bush's Iraq plans. But Democrats appear increasingly receptive to the idea that Shinseki, despite his opposition to the hated George Bush, could have to go. There is no important Obama constituency that would be offended by aggressive action at the VA. We are left with the discomforting notion that perhaps the president simply doesn’t know how to respond to the VA scandal. Sarah Palin may also have a valid point: the president is lazy. He may be the first president in history to receive the Presidential Daily Briefing as late as 10 am, which is known to most of us proles as mid-morning.

It seems to me that this is the first presidency in memory that responds to every scandal by fixating on who's to blame (not President Obama, who only learned of the scandal from the newspapers) instead of what's to be done.

Although it would be good for an aggressive executive to jump into action and get immediate help for our veterans, it is a sad fact that President Barack Obama cannot solve the VA’s problems any more than those other presidents. Solving the problem would mean admitting something that President Obama simply could not face: government-run health systems are bound to function in a way that ultimately harms patients. This is why, if we are to do right by our veterans, we will most likely have to do it on another president's watch.

A look at the VA hospitals would have been more than enough to anticipate the massive problems that keep popping up as we try to implement ObamaCare.

By all means we need to do better by our veterans.

That begins with recognizing that the problems they’ve experienced at the VA hospitals — unaccountable bureaucracy, long waiting lists, rationed care — are the hallmark of government health care.

If the government can’t even make such a system work for our vets, what makes anyone think it will work for the rest of us?

Still, President Obama could be more like George W. Bush and take some steps to give immediate relief to veterans and their worried families.