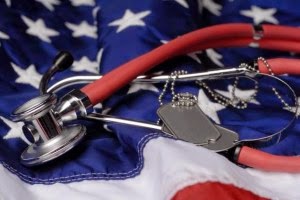 In 2012, the U.S. Department of Veterans Affairs paid at least $11.4 million to 174 nurses, mental-health specialists, therapists, and other health-care professionals who, instead of caring for veterans, worked full-time doing union business.

The list of these taxpayer-funded union representatives at VA offices around the nation and their salaries was obtained through the Freedom of Information Act by Georgia representative Phil Gingrey’s staff and provided to National Review Online.

“So many health-care providers were on that list — nurses or physical therapists or whatever they may be — when so many veterans are falling through the cracks,” a Gingrey aide tells me. “It’s kind of shocking that these paid employees wouldn’t be fully dedicated to patient care.”

In total, the VA spent at least $13.77 million on 251 salaried employees performing full-time union work. Others, who were not included on the list provided by the VA, work part-time for unions at the taxpayer expense. In fiscal year 2011, the latest on record, the VA used 998,483 hours of this “official time,” costing taxpayers more than $42 million.

The newly released records show that in Baltimore, which has the nation’s longest wait times for veterans’ claims, taxpayers covered $372,674 in salary costs in 2012 for a clinical dietetic technician, a patient-services assistant, a health technician, a medical-support assistant, and two nurses to spend all their time at work on union issues and none of it working with veterans.

In Columbia, S.C., the VA pays one health technician a $40,706 salary to work for the American Federation of Government Employees.

At that same location, CNN reported in January, a 44-year-old veteran named Barry Coates was forced to wait a year for a colonoscopy, despite intense pain, constipation, and rectal bleeding. When Coates finally got his appointment, doctors found a tumor the size of a baseball — Stage 4 colorectal cancer that had metastasized elsewhere.

Testifying on the Hill in April, Coates described his constant pain and suffering. “I am totally and permanently impotent as well as incontinent,” he said. “It is likely too late for me. The gross negligence of my ongoing problems and crippling back log epidemic of the VA medical system has not only handed me a death sentence but ruined the quality of my life I have for the meantime.”

At the Phoenix VA system, where CNN has reported that at least 40 veterans died waiting for appointments, taxpayers cover the costs of a practical nurse (salary: $54,014) and a medical-administration specialist (salary: $59,849), neither of whom work with veterans. There, as many as 1,600 sick veterans faced months-long waits to see a physician, according to CNN.

In Boston, the VA paid a cumulative annual salary of $587,112 in 2012 to six nurses who, instead of treating patients, work for unions.

Employees across the federal government are paid full-time or part-time to perform work for their various unions, but perhaps nowhere is the practice more offensive than the overburdened VA.

— Jillian Kay Melchior is a Thomas L. Rhodes Fellow for the Franklin Center for Government and Public Integrity. She is also a senior fellow at the Independent Women’s Forum.