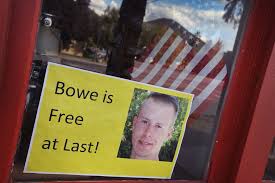 Scour the Internet until your fingers bleed, and you won’t find a single person who has denied that Bowe Bergdahl is someone’s child.

Goldberg was reacting to President Obama’s saying that he makes no apologies for getting likely deserter Bowe Bergdahl back because Bergdahl is “somebody’s child.” Pundit Juan Williams carried this theme further on Fox on Sunday when he said, speaking of Bergdahl, that America should “cherish this child.”

For heaven’s sake, this “child” is 28 years old and quite likely a deserter from the U.S. Army. Infantilizing desertion is very postmodern and I am afraid very degenerate. Bear in mind, there are arguments for going many extra miles to return Bergdahl to this country. He deserves his day in a military court and a lawyer to help him clear his name. But he is not a child.

Bernard Jordan, who at 89-years-old skipped out of his nursing home to attend D-Day celebrations last week in Normandy, was 19-years old when U.S. and British forces stormed the beaches at Normandy, taking unprecedented casualties. Fortunately, he knew that he was not a child on that most meaningful day of his life, when he saw his friends dying around him. What if the Boys of Pointe du Hoc had thought of themselves as children?

I wonder if the president’s approval of our military personel extends to the young men in Bergdahl’s  platoon who have come forward to speak about a soldier they believe deserted them and his duty? Sophisticates like to view veterans as suicidal and unable to survive after war. These young men come across as personable, well-spoken, and patriotic. In other words, these men appear to be fully adult and not the sophisticate’s image of the troubled soldier who must be forgiven for slipping away in the dark of the night.

According to the AP, Bergdahl is saying that he was tortured during his stay with the Taliban. If he fled into their arms, expressing disgust with the United States, only to be tortured, Bergdahl would not be the first person who overestimated the kindliness of America's enemies. That the Taliban didn’t live up to Bergdahl's expectations is no reason to pardon desertion.

Power Line predicts that Bergdahl will be pardoned by the president:

The advantages to Obama of pardoning Bergdahl seem overwhelming. With no court martial, there will be no investigation into Bergdahl’s conduct which, in addition to desertion, may include collaboration with the Taliban whom he sought out so earnestly after abandoning his unit. And there will be no investigation into the causal link between Bergdahl’s walkabout and the deaths of American soldiers who went looking for him.

Finally, and crucially, by short-circuiting an investigation, Obama will likely prevent us from learning how much he knew (or should have known) about Bergdahl’s conduct and its impact on American lives before he decided to release five Taliban commanders in exchange for the deserter.

It is indeed likely that the enemy wasn’t alone in finding in Bergdahl a useful pawn: the president wants to close Gitmo and the swap of Bergdahl for the worst of the worst at Gitmo appears to be the first step of that process.