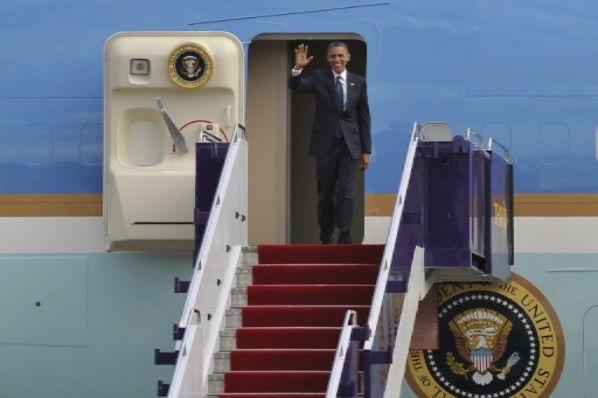 President Obama: Perks Are Great but Get Me Outta Here!

While it is unlikely that anybody will ever toss a shoe at Barack Obama, and the media still treats him more gently than it ever did his predecessor, even Democrats know it: this presidency is ending badly.

Most of us are already beginning our countdowns not for Santa Claus but for the end of the Obama years. "It's been a long eight years," a friend sighed the other day. It has indeed. A country can stand only so much of this kind of hope and change.

One of the reasons that things are turning bad for the Obama presidency is that Obama was elected on a purely chimerical notion: that the U.S. overreacted to September 11. With a special president like Mr. Obama, whose Muslim roots would give him insights into the world of Islam, and indeed make him more popular around the world than the cowboy from Texas, this happily could be reversed. U.S. power, which, after all was the heart of problem, would be pulled back under Obama.

But the threat from radical Islam was real and not based on our lacking a charismatic president who understood other cultures. In fact, if there is one thing that President Obama doesn't understand, it appears to be Islam. As a result of Obama's faculty lounge view of the world, U.S. citizens feel less safe than when Obama took office. According to a Gallup survey released earlier this month, Americans consider terrorism the number one problem the U.S. faces. Sounds so Bush-era, doesn't it?

At least, as President Obama relaxes on the beach in Hawaii, he can reminisce about that heady time when a triumphant Democratic majority rammed the Affordable Care Act through Congress without a single vote from the Republicans? Well, maybe not. ObamaCare is in shambles. Coops are failing left and right and the cost of premiums is out of sight. "Everyone knew that it was just a matter of time, but no one expected [ObamaCare] to fail this fast," Rick Manning, president of Americans for Limited Government, recently wrote in The Hill.

President Obama was elected at an economically bleak time, but after eight years, recovery is anemic. There is very little to show for the seven hundred billion plus stimulus package–except for the bill we're going to be paying for a long time. It is true that the unemployment level is down but much of this is because too many people have gotten out of the workforce altogether and others are working part time. But President Obama never did really respect entrepreneurs who, after all are the people, who create jobs. "If you’ve got a business — you didn’t build that. Somebody else made that happen," he memorably said to a crowd in Roanoke, Virginia.

But surely African-Americans, who were elated at the election of the first black president, are better off though? Well, not exactly. According to data from the Census Bureau’s Current Population Survey, the percentage of black Americans living in poverty has grown from 25.7 to 27.2 during the Obama presidency. Food stamp usage among blacks and whites has skyrocketed under Obama.

But there is one aspect of race relations to which President Obama has made a significant contribution: he has divided us further. While racism and police brutality are never to be tolerated, President Obama has latched onto shootings, which upon investigation, likely as not turn out not to have had a racial element, and exploited them for political gain.

The level of racial animosity in this country is higher now that any time in my memory. This may well be the worst part of President Obama's legacy. ObamaCare is going to collapse, and, if voters are wise, we will elect a president who will deal more effectively with the threat of terrorism, but racial animosity will linger. It is especially tragic that the man who could have brought us together tried to turn us against each other.

President Obama's other big ticket legacy item is a disrespect for our system of government. He has frequently bypassed Congress with his pen and phone, though ironically that makes most of these assertions of executive power reversible by the next guy or gal with a pen and phone. But terrible damage to the American system may, like racial hatred, be long-lasting.

As I write this the president and his family are creating one heck of a carbon footprint en route to the Christmas holiday in Hawaii. By all means, enjoy your vacation Mr. President. The nation could use a break–a long one–from your reign too.

If Schools Don’t Open in the Fall, Funding Should Follow the Child