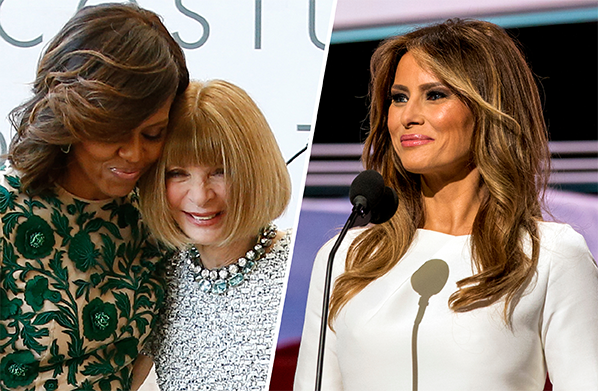 First Lady Melania Trump hasn’t been on the cover of Vogue since her engagement to Donald Trump and, it’s likely, she won’t ever be again.

In a recent interview, the magazine’s editor exposed how her political bias colors her view of Trump and the partisanship behind the coveted cover spot.

Michelle Obama has graced the cover of Vogue three times as First Lady. Melania Trump has not been on the cover once since she became the First Lady in 2017. Vogue’s snub of Trump is especially glaring since they placed her on the cover in 2005 after she got engaged.

We now have a clearer picture of why the retired model is ignored by the fashion world she once occupied.

In an interview with The Economist’s Anne McElvoy, Wintour was asked about Trump’s fashion as an ambassador when visiting the U.K.

“Well, I think first lady Michelle Obama really was so incredible in every decision she made about fashion. She supported young American designers. She supported designers, indeed, from all over the world. She was the best ambassador this country could possibly have — in many ways, obviously, way beyond fashion."

McElvoy didn’t let Wintour get away, but pressed her harder about Trump – not Obama – replying:

“But she's not the first lady now. So what about the one you've got now?"

And Wintour again snubbed Trump, refusing to even acknowledge her:

Wintour may be a big Democratic Party donor, but she’s also a fashion leader. In this exchange, we read between the lines that for her politics trumps fashion.

We shouldn’t be too surprised though about Vogue and other fashion magazines ignoring Melania Trump. This is a strategy that they employ – among many others – to silence conservative women.

In this case, they fawn over Michelle but pretend Melania doesn’t exist. Progressive privilege is discriminatory and it’s wrong.

Following the stunning loss of Hillary Clinton, Vogue featured Obama in a cover story for the last issue of 2016. It was a farewell to whom they call a fashion icon. We’ll see if Melania gets a parting cover story for her last month in the White House, but it’s unlikely.

Vogue is a private magazine and can do whatever it wants to do with its issues. However, if they want to be a voice for women, they should at least be fair to all women and treat women the same regardless of their political leaning. Discrimination is never in vogue.