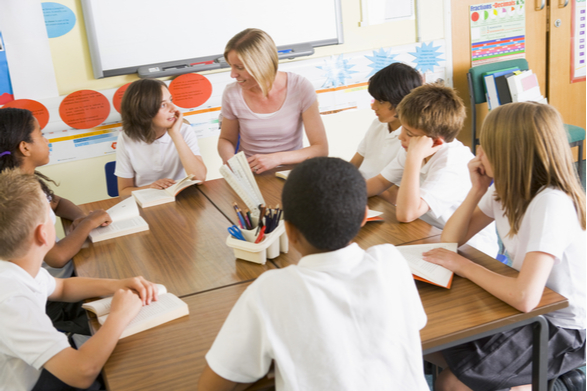 When Mr. Metcalf’s seventh-graders at Chandler Preparatory Academy drift off task, he calls out, “Students, what are we here to do?” They answer: “We are here to learn to love what is beautiful.”

–from “Great Hearts, Great Minds,” portrait of an unusual group of charter schools in City Journal

Right on the heels of a depressing report on “the death of the humanities” comes an inspiring story about Great Hearts charter schools, which specialize in providing a classical education. Thanks, City Journal for a nice little Christmas present.

There are 30 Great Hearts classical schools in two states.

Max Eden, author of the City Journal piece on Great Hearts schools captures high school students discussing Dante’s poetry, Ivan Karamazov, and Aristotle’s Nicomachean Ethics. They do more than explain how they are feeling about these works. They read and think.

The Great Hearts schools sound like a wonderful environment:

The hallways of its elementary schools are not lined with pennants from flagship universities and colleges like Harvard, Yale, and Princeton but with paintings by artists whom even students at those prestigious universities may graduate without encountering, such as Vermeer, Botticelli, and Titian.

The school’s official mission statement: “To cultivate the minds and hearts of students through the pursuit of Truth, Goodness, and Beauty.” John Paul Poppleton, headmaster of Arizona’s Chandler Prep, offers a slightly different version: “To strengthen minds and souls so that students aren’t just caught up in the soup of postmodernity.”

Judging by the seniors I spoke with, Great Hearts’ approach is working. “What really matters is the way my education has changed me,” says Meg Van Brunt, a senior at Veritas Prep in Phoenix.

“A lot of teenagers are desire-driven, and they’re always asked to explain what they’re feeling. Here, they encourage us to follow a Socratic way of thinking. Start with your calculative faculties, then your spirited faculties—I sound like I’m regurgitating, but I’m not—and then desire is something that’s subject to those faculties.”

Great Hearts, according to Eden, has been “morally suspect” in the charter movement because the movement as a whole is dedicated to serving the disadvantaged. Great Hearts, so far, has drawn from a more middle-class pool. This has made the schools even more controversial than most charters.

A Nashville law, for example, stipulated that charters could only serve low-income kids. The state Department of Education overruled the law and thus a Great Hearts school could open.

Charter schools admit without regard to income or race, but the fist class of the Great Hearts school in Nashville would have drawn mostly middle-class kids. But there is no reason why low-income kids can’t benefit just as handsomely from a classical education. Let’s hope Great Hearts eventually attracts low-income kids, as one suspects will be the case.

Of a graduating class of 498 in 2019, 97 will enroll directly to college, receiving a total of $41 million in scholarship aid.

The school does not emphasize elite colleges, but, says a teacher, “We ask our students to reflect and write on the connection between virtue and happiness. If we emphasized that they needed to attend an elite college, that would be very hypocritical.”

This looks as much like a cultural renovation project as much as a school.

If you love the humanities, it will make your day.