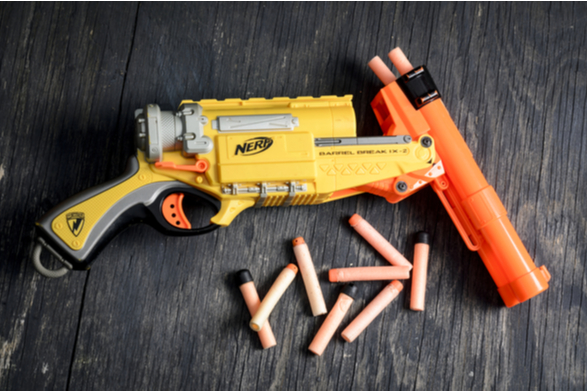 The letter stated, “…as the holidays approach, we are reminded of our mission to protect the safety of children.”

I’m the mother of three boys and my children own approximately 3,000 Nerf guns. My boys regularly open carry their Nerf guns in our back yard. Occasionally they even run to the front yard where they can be seen by passing motorists. Amazingly, vehicles continue to pass our house and sometimes, brave people even sometimes stop by our well-armed and heavily guarded house.

Despite living in a dark blue city crawling with Moms Demand Action anti-constitutionalists, my children even bring their Nerf guns to other people’s houses so that they can play with the kids of parents who are solidly pro-gun control. It’s so weird that no one has called me to object or ask that my kids keep their “assault-style” weapons at home.

In what can only be called a miracle, my children and their friends are all still alive and haven’t experienced any gun-related injuries. None of my children have spent time in jail, nor have their friends who are clearly accessories in these gun crimes.

I’m just spit balling here, but my best guess as to why my kids haven’t died or killed anyone is because Nerf guns actually use foam darts and balls and lightweight plastic disks. Because, you know, Nerf guns are TOYS!

Perhaps the Empire State Consumer Project, which is staffed by two women and runs on a budget of around $3,500, doesn’t understand that Nerf guns aren’t real. Or maybe this group is preying on the very real concerns parents have about gun violence and is using these tragedies in order to further a political goal.

That’s pretty gross. Yet, sadly this approach appeals to a certain demographic of moms, who might be shocked when their sweet child suddenly wants to play cops and robbers or other aggressive games and can’t understand why their boys want to turn their fingers, sticks, cardboard boxes, or really anything (remember pop tart gun?) into a weapon. And naturally, it’s easy to blame toys, like Nerf guns, on this phenomenon (heretofore known as normal boy behavior).

Years ago, I met a mom outside my children’s preschool who told me she’d banned all sorts of toy weapons from her home. No cowboy-style toy rifles or six-shooters, no Nerf guns, star wars blasters or light sabers, no pirate swords, or sling shots, etc. She didn’t even like imaginative play involving aggressive behavior.

Her son, she said, would play with art supplies, he’d read, do puzzles, sing and only play with “learning toys.”

I smiled. This was her first son. I was on my third. I knew she’d soon learn that her boy would find ways to make a weapon out of anything (I giggled when he came out of class one day with a paper sword and shield) and would constantly astonish her with his aggressiveness — his desire to run, climb, stomp, destroy, damage, and CONQUOR!

The next year, she bemoaned this exact situation. She was so confused why her sweet, little boy insisted on playing war and robbers and cowboys with his little friends. Why was he so loud and physical? Why did he want to fight and act so savage? Mostly she was confused and concerned that he seemed to turn everything into a gun—including his own fingers!

Three years later, my friend had given up. In fact, for my own son’s birthday party during that last year of preschool, her son actually gave my son a Nerf gun. I ribbed her a little and reminded her of her commitment to keep her home a gun free zone. She laughed and showed me a picture on her phone—it was a basket in her son’s room…filled with all sorts of weapons.

The duo at the Empire State Consumer Project might not have kids. Perhaps they’ve never had boys. More likely, they don’t care about the natural behaviors of kids nor do they care that both parents and kids are smart enough to know that Nerf guns aren’t real. They have an agenda to push and they'll deny common sense to reach their anti-gun goal.