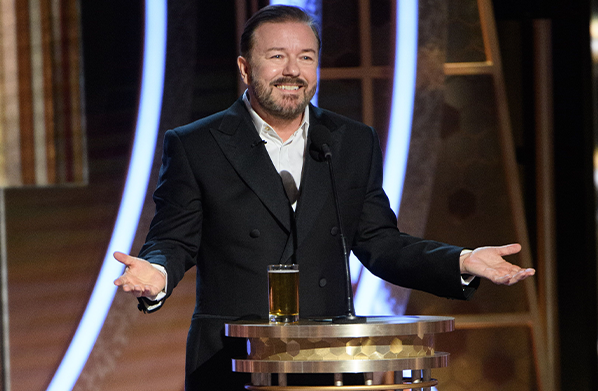 Best Commentary Yet on Ricky Gervais at Golden Globes

Leave it to Kay Hymowitz to provide the very best commentary yet on why Ricky Gervais’ last ever Golden Globes gig was such a delight:

Gervais was doing something comics have done through the ages: reminding us that the glamorous emperors might be naked, and the loudest singers in church the most corrupt.

In modern times, the emperors are vain and empty headed Hollywood stars who see fit to lecture us lesser mortals from their vast store of banal auto-opinions. And who, unlike Gervais, generally aren’t funny.

Gervais’s politics are not easy to pigeonhole. He hates Trump, disdains climate change deniers, and ridicules religion, calling himself a “godless ape” in his Twitter bio. Clearly, he has no love for corporate America. But he also finds elite identity politics and celebrity self-regard absurd. His heterodoxy means he is bound to offend some of his audience whenever he steps on stage. And so he did on Sunday night. …

Finding this funny—and millions of us did—requires thinking your average Hollywood bigshot is no more knowledgeable or interesting on the great issues of our time than my great aunt Gladys, even though they genuinely think they are. It also requires believing that Hollywood machers have considerable power and money, which means their opinions, unlike my great aunt’s, have the potential to matter. Like all self-inflated hypocrites, they need debunking.

Let’s admit that punching up Gervais-style usually comes with a whiff of envy. That’s especially true when it comes to Hollywood’s powerful, who have the added advantage of beauty, world fame, and wealth. Celebrities are to us as Olympian gods were to the ancients; the public wants to pore over details about their clothes, Los Angeles mansions, Aspen chalets, Cabo vacays, love affairs, yoga teachers, facialists, and plastic surgeons.

We normal folks can only press our noses against the glass of dazzling parties like the Golden Globes—the name itself carries mythical undertones—with flowers flown in from Ecuador and Italy and a 100 percent plant-based meal, knowing that we will never be allowed in. It’s not fair.

And that’s exactly why Hollywood royalty should stay humble and respect their place in the cultural ecosystem.