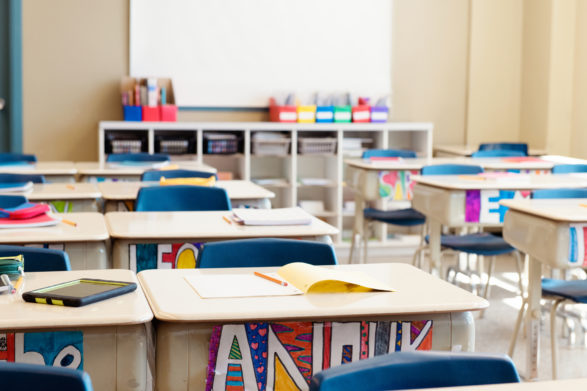 Get Your Kids Out of Public School

This is the Right’s greatest opportunity in decades. Will we take it?

We are standing on the precipice of the biggest education revolution in generations.

As schools refuse at union behest to reopen full-time instruction in the fall, parents are flooding into alternative options like homeschooling and pandemic “pods.” For the first time in modern political memory, there is likely to be an exodus from public schools.

It will not just be the worst-served in poorer neighborhoods, to whom most school choice programs are geared, that leave. It will also be middle-class and wealthier families. This presents the biggest opportunity for domestic victory the Right has had in 70 years—if the Republican Party does not squander it.

William F. Buckley, Jr. may have started the conservative lament about the direction of higher education and academia in 1951, but the Right has only recently woken up to the political dangers of the elementary and secondary system. Perhaps this is because, in many ways, the common school system first implemented in the 19th century has, in the past, been an Americanizing, patriotic, and assimilatory institution.

But as it has done to so many institutions in American life, the Left’s long march has turned public school’s purpose upside down and inside out. Far from inculcating Reagan’s “informed patriotism,” today’s public schools now teach young citizens an outsized vision of America’s faults and a twisted, false view of her remarkable strengths.

While textbook information is proprietary, Howard Zinn’s A People’s History has long been a staple of high school classrooms, now bolstered by the 4,500 (at minimum) schools that have adopted the 1619 Project curriculum—a curriculum even the Project’s author now acknowledges is not factual history, but anti-American polemic.

There’s an inverse relationship between civic knowledge and the now-fashionable opinions that America is a racist and sexist country. Among people under 45, only one in five can pass the extremely basic U.S. citizenship exam given to naturalized immigrants. But half of that generation are convinced that America is a racist country and 40% disagree that we should be proud of our history.

There can be little doubt that the effect of public schooling today is far from its original purpose of forming citizens capable of living in a self-governing republic. But for decades, despite a robust private school sector, two million homeschoolers, and dozens of limited school choice programs, public school has remained the default option for 90% of American students. That may be about to change.

The Catastrophe of Remote Learning

The pandemic, with a self-defeating assist from teachers’ unions, is transforming our education landscape beyond all recognition. Parenting Facebook groups and other online forums are currently being overrun by families desperate to get a handle on what learning at home in a “pod” might entail. Overnight, gathering together a handful to a dozen  students into a “co-quarantined” teaching or tutoring group has become the hottest new trend in education.

Homeschooling and micro-school parents are finding themselves inundated with questions from friends who had never considered those options before. So many are notifying states of their intentions to withdraw from public schools that government servers, unused to the strain, are crashing. Agencies previously dedicated to the placement of au pairs and nannies are capitalizing on the madness and have switched to matching tutors and teachers with families.

Until enrollment counts in the fall are taken, we won’t know for sure the extent of the exodus. But it will almost certainly dwarf normal figures. In Montgomery County, Maryland, for example, local parents have heard that instead of an expected enrollment of 2500, as few as 300 students had signed up for their local public school as of early August.

Why is this happening? After struggling through the spring, parents know what districts refuse to acknowledge: distance learning has been an utter disaster. A majority of districts never actually implemented live online instruction, and instead saddled parents with a frustrating combination of homework and multiplying digital platforms.

And that was in the better schools; in already-struggling places like Chicago, almost half of the city’s teachers did not even bother to log in to the district’s learning platforms at least three times a week. While families limped across the finish line in the initial months of the pandemic, the prospect of beginning another year this way seems to many not just inadvisable, but impossible.

The push to reopen schools does not stem from downplaying or disbelief about the effects of the virus: to the contrary, polls consistently show high levels of anxiety about the safety of students and teachers. If parents felt that schools were negotiating with them in good faith and preparing to deliver a better form of hybrid instruction in the fall, we might not have seen the mad scramble to exit the system.

But instead of working with parents, teachers’ unions and districts have chosen this moment to fully reveal how low students and families are on their list of priorities with hysterical hyperbole and outrageous non-health-related demands.

The Unions Overplay Their Hand

First, of course, there’s the request for more money from Washington. Unions want $245 billion—more than three times the normal annual federal expenditure—to reopen, despite the fact that funds from the first bailout in the CARES Act mostly have yet to be put to good use. Americans, who consistently and vastly underestimate how much the country spends on education and who have largely bought the Left’s lie that schools are underfunded, might have swallowed that one.

But in cities across the country, unions overplayed their hand. In Los Angeles they demanded that a moratorium be placed on charter schools and that the police departments be defunded before schools could open. In state legislatures across the country, unions lobbied to restrict families from switching to already-operating virtual charter schools accustomed to providing online instruction. A coalition of ten teachers’ unions across the country and the Democratic Socialists of America put together a list of political demands for reopening that included banning private school choice, testing, and police in schools.

In places where local authorities initially determined it was safe to open schools, union objections have forced last-minute reversals. In Washington, D.C., unions lined up body bags outside school system offices to show their displeasure with a potential part-time reopening; Washington, D.C. public schools will now be virtual only through fall.

Furthermore, unions have been in a desperate bid to foreclose other possibilities for parents. As early as March, they were frantically lobbying state legislatures in a bid to control what they seem to view as their captive market share of families, regardless of the quality of services offered. In Oregon, in response to lobbying from unions, the state stopped 1,600 students from transferring to a single virtual charter school network alone. Similar arrangements were passed in Pennsylvania.

And it’s not just their public competition they want to put on ice. In aforementioned Montgomery County, the municipality initially tried to force private schools to close in fall alongside public schools, a move that resulted in a huge outcry and an appeal to the governor that was eventually honored.

Union and district representatives have been relentlessly encouraging parents to avoid homeschooling or learning pods for the sake of “equity,” ignoring that shoddy distance learning also widens education gaps. Even more blatantly self-serving is their demand that parents lie to the state and enroll their children for the funds even if they plan to provide alternate learning environments.

The message from unions and district schools to struggling parents during this difficult time cannot be described as anything but tone-deaf. Many—perhaps millions—of families are getting a hard wake-up call that the current public school system places the needs of their children last while advancing nakedly partisan self-interest. “We don’t owe you an education for your child,” schools are indirectly telling parents. “But you owe us your tax dollars.”

Unions clearly think parents will tolerate being dictated to, hemmed in, and left bereft of any options other than the shoddy distance learning they experienced back in spring; I do not.

Conservatives should step directly into this opening. If parents are being asked to shoulder the duties of actually educating their children, the tax dollars allocated for that purpose should flow directly to them to use for learning pods, private school, homeschooling equipment and curricula, tutors, or any other educational purpose they see fit.

This policy solution is not novel. Education savings accounts, which allow exactly the type of flexible use of state education funds that families so desperately need in the coming months, are already in operation in five states and receive extremely high satisfaction ratings from those who utilize them. As chronicled by Bill Mattox of the James Madison Institute, they’ve even been used in Florida to fund micro-schools—that is, podding—for years.

Providing families with a portion of the state funds that currently flow directly to districts, whether they’re serving families or not, would allow parents of all income levels to hire teachers for small-group, in-person learning, alleviating both fears about risk from the virus and some of the equity concerns now raised by unions and the New York Times.

Frankly, it’s rare that circumstances and policy solutions fit so seamlessly together.

Unfortunately, outside of a few presidential tweets about school reopening, the Republican Party’s response has been muted. Senator Rand Paul put his fellow caucus members on blast for considering a $100 billion bailout for public schools, even as they refuse to reopen, and he recently introduced legislation proposing to reroute federal education funds (about ten percent of education funding overall) to families. Donald Trump and his surrogates continue to help the cause of school choice from the bully pulpit, and some states like South Carolina, Oklahoma and New Hampshire have redirected aid funds directly to families.

While welcome, these limited and temporary programs are weak sauce considering that the Right has been on its cultural heels for decades, grasping at new ways to make arguments in favor of the American system and way of life to a generation that increasingly, thanks to the public school system and academia, knows little about it other than that it’s evil.

The Republican Party and the Right face a vitally important choice in the next several weeks: back parents with funds to support alternative arrangements like pods and seize the offensive against one of the Left’s most crucial cultural assets, or patch through some temporary Band-Aids in the hopes that we can all go “back to normal” after the immediate threat has passed. If they choose the latter, the normal we return to—while blessedly happier in certain ways than life in the age of COVID-19—will nevertheless be a return to more decades of culture war losses that the country cannot afford.