Last week, Virginia state lawmakers approved a bill to ban the use of inexpensive, lightweight polystyrene food and beverage containers (better known as Styrofoam) by restaurants. The District of Columbia banned Styrofoam food containers and cups in 2016 and the Maryland legislature banned them in 2020. Both the Virginia Senate and House approved the measure, and the bill now heads to Gov. Ralph Northam’s for signature.

Many look at this sort of ban as progress. Some may shrug. Does anyone really care?

These sorts of bans are more about virtue-signaling environmental stewardship rather than actually doing something to improve the environment. And these empty gestures come at a high cost.

First, there’s no doubt that Styrofoam is viewed negatively. It’s ugly, it squeaks, and higher-end food establishments no longer use these containers, which gives Styrofoam an association with low-cost, greasy, unhealthy foods. But Styrofoam’s lack of coolness doesn’t denote harm—to humans or the environment. And Styrofoam’s removal from the marketplace is the opposite of progress.

It’s a bit hard to believe that the invention of polystyrene was at one time considered exciting scientific progress. In 1953, organic chemist Hermann Staudinger won the Nobel Prize in chemistry for his research on polymers—research that would eventually lead to the development of Styrofoam.

Seventy years ago, Styrofoam wasn’t the subject of ridicule. Rather, it was an exciting and modern invention that offered food establishments and consumers lightweight (actually Styrofoam is 98 percent air) and watertight containers that are inexpensive to manufacture. And contrary to what some misguided environmentalists say, polystyrene can be recycled. In fact, cities across the country have been doing it for years. And there’s even a market for recycled polystyrene—in construction materials (including for use in “green” buildings) and for reusable packaging of consumer goods. And one recent study found that Styrofoam breaks down easily when exposed to sunlight, which runs contrary to the popular myth that it lasts forever.

There are even environmental benefits to using Styrofoam. Due to it being so lightweight, transporting Styrofoam produces less carbon in the environment and Styrofoam containers take much less room in landfills because they can be easily crushed and compacted. In fact, according to the EPA, food and paper make up the bulk of volume in landfills, whereas plastic products make up 12 percent of the trash—about the same amount as what people throw away in “yard waste.” Styrofoam is also energy efficient. Life cycle studies show that it actually requires a lot less energy to produce Styrofoam cups than paper, glass, reusable plastic, and ceramic beverage containers. 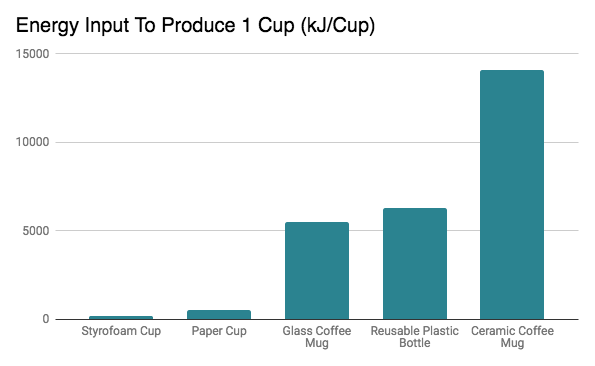 Studies have also shown that replacing one foam cup with three paper cups (which one needs to do since paper cups degrade and leak) could require 36 times more water for production. And then there’s the matter of the trees: The production of disposable cups relies heavily on natural resources. Over 20 million trees are cut down each year to produce single-use paper cups. That doesn’t mean paper cups are an environmental disaster. It just means that there are trade-offs with each choice.

Another thing missing in discussions on polystyrene products is that these products are convenient and useful to consumers. For one, they keep food and beverages warm. That matters to someone who just spent his or her own money on a hot to-go meal or cup of coffee or other hot beverage. It matters to construction workers who often have to eat outside. It matters to office workers who sometimes need to walk a distance for a meal. It matters to moms who don’t want kids to burn their fingers while holding a cup of hot cocoa.

In addition, Styrofoam containers don’t leak or degrade within minutes of being filled (like paper containers), which may cause people to throw their just-purchased beverage out before they’re done or feel the urge to drink them quickly with less enjoyment.

But the really galling thing about this bill is the timing: due to COVID-19 and the government-mandated shutdowns, restaurants are struggling badly! Many have closed, leaving their employees jobless. But what’s worse is that, in many cases, take out food is the only thing keeping these restaurants afloat.

Why would lawmakers ignore these struggling businesses and pass a bill that makes doing business even more expensive? In fact, way back in 2013, when then-Mayor Bloomberg was banning Styrofoam in New York City, a study found that banning Styrofoam cost nearly $100 million dollars and that 1,200 jobs were at risk.

Luckily, there’s a four-year phase-in period for Virginia restaurants to adopt this wildly unnecessary regulation, and the ban is limited to restaurants with 20 or more locations. Yet, most believe the restaurant industry will be struggling for years to come.

Lawmakers shouldn’t make it harder for businesses, like restaurants, to get back on their feet. Increasing the cost of doing business will do just that!

California Senator Introduces Legislation to Ban Fracking in CA by 2027

Two Truths and a Lie: Coffee and Pregnancy