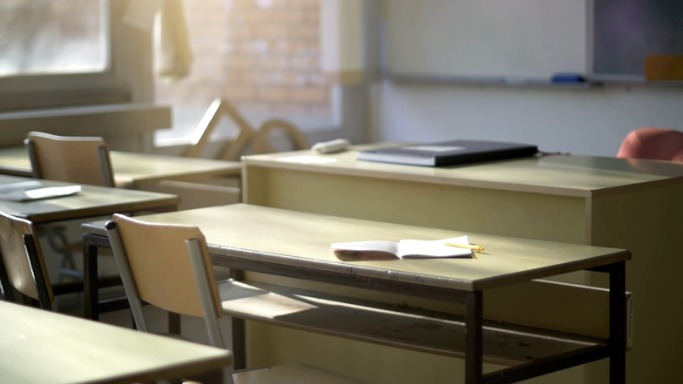 School Closures Are A National Disgrace

Our year-long experiment with remote learning has been a catastrophic failure, with poor kids suffering the most.

The evidence has long been clear—painfully, tragically, frighteningly clear—that the costs of COVID-19 school closures vastly outweigh the benefits. We know that elementary-age children face very little risk from COVID. We know that teachers face very little risk of transmission from young students in the classroom. Older students pose a more difficult challenge; but again, we know from experience that middle schools and high schools can reopen without causing major outbreaks.

Above all, we know that America’s yearlong experiment with remote learning has been a catastrophic failure.

For starters, it has done serious—and in many cases permanent—damage to children’s academic prospects. The Stanford Center for Research on Education Outcomes has estimated that, during the spring of 2020 alone, students in 19 states and cities lost between 57 and 183 days of learning time in reading and between 136 and 232 days of learning time in math. Not surprisingly, school districts across America have witnessed a sharp spike in failing or near-failing grades—everywhere from Fairfax County, Virginia, to St. Paul, Minnesota, to Los Angeles and the Bay Area.

Hoover Institution economist Eric Hanushek and others have shown that significant learning losses can lead to significant reductions in lifetime income, especially for the underprivileged.

This gets to a profound irony of COVID school closures: They have been imposed and/or supported by the same people—namely, Democratic officials and union leaders—who constantly demand greater “equity” in American life. Yet school closures have made our society much less equitable, because they have disproportionately harmed poor kids.

To cite just one example of the research on this phenomenon: economists from Yale, Penn, Northwestern, and the University of Amsterdam have found that “school closures have a large and persistent effect on educational outcomes that is highly unequal. High school students from poor neighborhoods suffer a learning loss of 0.4 standard deviations, whereas children from rich neighborhoods remain unscathed.”

Moreover, a year after COVID school closures first started, white students are much more likely than African-American or Hispanic students to be attending school in person. In a February NPR/Ipsos poll, 65 percent of Black parents and 57 percent of Hispanic parents said their children were still all remote, compared with only 38 percent of white parents.

Those numbers should concentrate the minds of progressives. So should the data on mental-health problems: school closures have contributed to a shocking increase in anxiety, depression, and suicidal thoughts among children, and particularly among teenagers.

“Almost a year into the pandemic,” Dr. Lee Beers, president of the American Academy of Pediatrics, said on February 24th, “what began as a public-health emergency is turning into a mental-health crisis among our nation’s children and adolescents.”

NPR recently discussed this trend with hospital providers in seven states, all of whom “reported a similar trend: More suicidal children are coming to their hospitals—in worse mental states.”

For instance: “The number of kids with suicide attempts coming to the emergency room at UCSF Benioff Children’s Hospital Oakland, in California, in the fall of 2020 was double the number in the fall of 2019” (emphasis added).

At Indianapolis’s Riley Hospital for Children, 108 kids and teenagers were hospitalized for suicide attempts in 2020, a 61 percent increase from 2019. The number in October 2020 was a staggering 250 percent higher than it was in October 2019, according to NPR.

Speaking of early warnings, school closures have made it much harder for guidance counselors and social workers to identify and report signs of child abuse. After reviewing and extrapolating the data from New York City, a research team led by Dr. Andrew Adesman of Cohen Children’s Medical Center estimated that more than 276,000 allegations of child abuse in the United States were not reported between March and May 2020.

Remote learning has also reduced access to dental care for many low-income children who used to receive oral examinations at school. “The closures have suspended regular dental health visits in schools from rural Oregon to New York State,” the New York Times noted in September. This is no small thing: According to the Centers for Disease Control and Prevention (CDC), tooth decay is still “the most common chronic disease of children aged 6 to 11 years and adolescents aged 12 to 19 years.”

To make matters worse, children are getting less physical activity because of school closures, and they’re snacking more often. As one Brooklyn-based pediatrician recently told the Wall Street Journal, “We’re seeing a lot of elementary school-aged kids who are gaining 20 to 30 pounds in a year.”

The Journal also spoke with a physician assistant from Staten Island. “Even kids in grammar school are getting depressed,” she said. “They miss their friends. A lot of them aren’t doing as well academically. With depression also comes weight gain. They’re bored, and I think they’re comfort-eating.”

Given the enormous costs of school closures, it’s no surprise that, according to a Gallup survey conducted last month, 79 percent of K–12 parents believe schools in their community should provide in-person learning right now. (That figure includes 94 percent of Republicans and 80 percent of independents.)

On March 19th, the CDC updated its social-distancing guidelines for children in schools from six feet to three feet. This should—at least in theory—accelerate the reopening of K–12 institutions that remain closed.

“Based on the data available, in-person learning in schools has not been associated with substantial community transmission,” the CDC affirmed. “Although national COVID-19 case incidence rates among children and adolescents have risen over time, this trend parallels trends observed among adults. Increases in case incidence among school-aged children and school reopenings do not appear to pre-date increases in community transmission.”

Both of my children (ages 9 and 6) have been able to attend school in person since the fall, for which I’m tremendously grateful. But I know plenty of people whose kids have been all remote for more than a year.

The closures may have been justified when the pandemic first began last March; we did not really understand the virus, and both teachers and parents were anxious about the risks. Yet by June and July, schools in Europe and Asia—and especially in Sweden—had demonstrated that they could safely reopen. Today, it is simply undeniable (a) that schools can offer in-person learning without exacerbating the pandemic and (b) that any public-health benefits of closing schools are easily overwhelmed by the costs.

This is true even in the hardest-hit states. For example, New Jersey has suffered more COVID-19 deaths per capita than any other state in America. And yet, at a media briefing on March 24th, Governor Phil Murphy said that “fewer than two-tenths of 1 percent” of all COVID cases recorded in New Jersey since August 1st could be linked to in-school spread.

“The science and data are clear that we can reopen schools safely and successfully,” Dr. Kim Newell Green, a pediatrician and professor at UC–San Francisco, recently told the New York Times. “However, media and the unions have fostered uncertainty and fear. We should all find a way to do right by our children with innovation and creativity, but above all, science.”

As Dr. Sandro Galea, the dean of the Boston University School of Public Health, wrote in Scientific American a few weeks ago, “Children have proven uniquely resilient to COVID-19, but many are already suffering lasting educational, mental and physical harms.”

Indeed, it’s not hyperbole to say that prolonged COVID school closures may rank among the worst and most destructive policy decisions in modern American history.

“The fact that you’re going to have schools that are going to be closed for this entire school year and probably even into the fall is a national disgrace,” Florida Governor Ron DeSantis declared last month.

The Hidden Costs of School Closures