Politicos like the phrase “a crisis is a terrible thing to waste,” but if there’s no crisis, politicians and the liberal media must manufacture one. This appears to be the case for President Biden’s infrastructure plan, which from the onset has been a bloated and unfocused collection of overspending on projects that hardly relate to infrastructure.

The Washington Post says, “President Biden aims to tackle some of the nation’s most pressing problems—from climate change to decaying water systems to the nation’s crumbling infrastructure,” and it claims that “the nation’s infrastructure woes … have been growing for decades.” 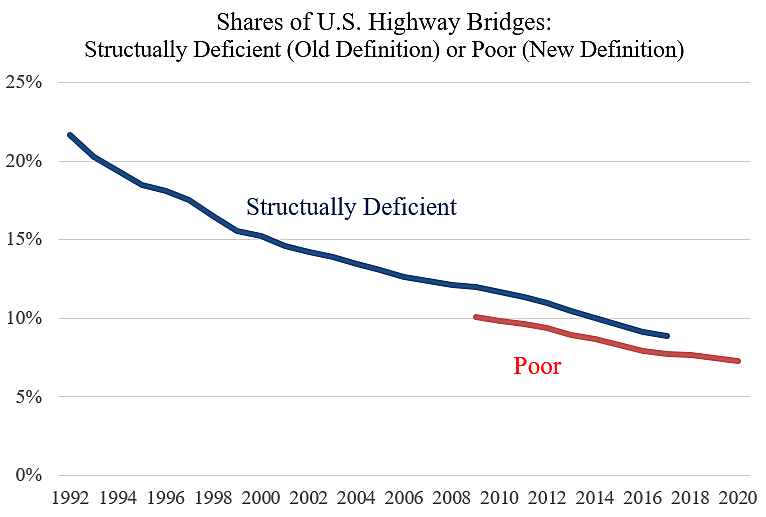 But as Edwards points out, we’ve seen just the opposite on our bridges. He writes:

What the politicians and news stories don’t tell you is that America’s bridges have been steadily improving for three decades. The Federal Highway Administration produces annual data on the condition of the nation’s more than 600,000 highway bridges. From 1992 to 2017, the agency has data on the number of bridges that are “structurally deficient.” Then the agency switched to new definitions and has data from 2009 to 2020 on the number in “poor” condition… The structurally deficient share fell from 21.7 percent in 1992 to 8.9 percent in 2017, while the poor share fell from 10.1 percent in 2009 to 7.3 percent in 2020… Not every news story sounds like a press release from a construction lobby group. A 2018 Reuters investigation found that an “analysis of nationwide bridge data reveals the fretting over the safety of bridges and other road infrastructure is overblown.” The article noted that “structurally deficient” bridges need repairs but would be closed if they were actually dangerous. It also noted that America’s roads and bridges compare quite favorably to those in other advanced economies.