Inflation up 5% in May compared to a year ago

They say the definition of insanity is doing the same thing over again and expecting a different result. Prices jumped yet again last month, now showing a 5 percent spike in May compared with a year ago. What’s causing the spike? Americans say it’s government spending, yet the Biden administration wants to keep spending more.

This is the largest increase in inflation since the Great Recession—according to data released Thursday by the Bureau of Labor Statistics. But even though the BLS data showed prices rose 0.6 percent in the past month, the Biden administration and the Federal Reserve don’t seem too concerned—believing the price spikes to be temporary as the post-COVID economy recovers. The problem is that neither institution wants to change its behavior—even though the American people believe their actions are driving the inflation. May 2021 polling by Harvard University with HarrisX found “massive government spending” was what Americans believe is the top cause for inflation. That was followed by “significant” injections of money by the federal reserve and thirdly, “uncontrollable government deficits.” 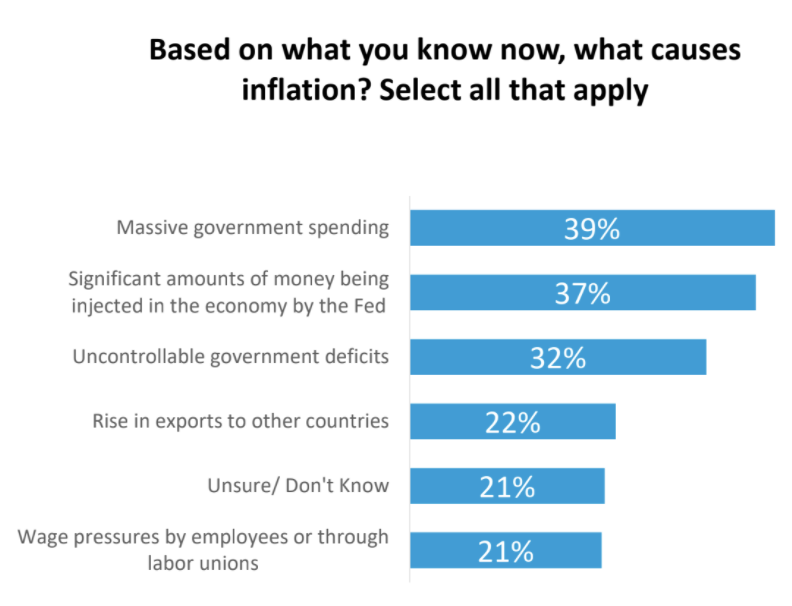 Part of this massive government spending is the extra $300 weekly on top of baseline unemployment payments. As the pandemic subsides, this leaves many businesses, particularly restaurants and hotels, struggling to fill openings. Businesses attribute hiring difficulties to extra unemployment payments, leading at least 25 states to end enhanced payments prior to their Sept. 6, 2021, Labor Day, federal expiration. They are doing the right thing, and the White House should listen.

The Wall Street Journal noted the inflationary effects of artificially-high wages, driven in part by a tight labor market competing with generous unemployment benefits. When more workers sit on sidelines, employers offer higher wages and bonuses, including Amazon in May offering $1,000 signing bonuses and raising average hourly wages to $17, above their previously-touted hourly $15. While this might sound encouraging, it is difficult for smaller firms to compete with behemoths who can raise wages, and it increases consumer prices, hitting poorer households hardest.

Families are feeling the inflation pinch in their grocery baskets, and unless the federal government reins in its actions, Americans will continue to suffer.

Two Truths And A Lie: Public Policy Should Incentivize Work, Not Compete With It

10 Unbelievable Incentives to Lure Americans Back to Work