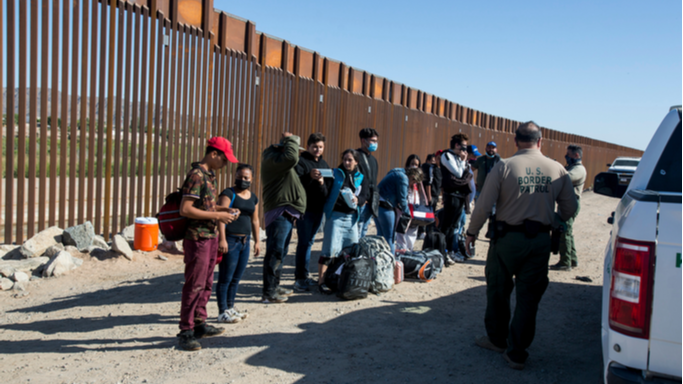 Imagine a store owner has a major shoplifting problem. The problem keeps getting worse because the court system is so backlogged that shoplifters rarely face consequences. Imagine, then, the store owner thinking, “I could allow everyone to take whatever they want, and I wouldn’t have anymore ‘shoplifting.’” Technically that is one way to go. Of course, the store owner goes bankrupt. And before you think what a dumb idea, this “solution” is what the Biden administration just proposed regarding illegal border entry.

On Aug. 20, the administration proposed an enormous immigration loophole that will exacerbate illegal border crossings. Right now, immigrants who cross illegally are required to be turned around—but an alien can avoid deportation by claiming “asylum.” To gain asylum, the applicant must prove that he is a refugee: unable to live in his home country because of “a well-founded fear of persecution on account of race, religion, nationality, membership in a particular social group, or political opinion.” Only 9 to 15 percent of applicants end up meeting this standard (and many of those are from China and Venezuela). Indeed, most so-called asylum seekers at the border don’t even bother to file for asylum because, once in the country, they face little chance of deportation.

The whole process takes too long. After a migrant crosses the border and claims asylum, an “asylum officer” determines whether the applicant is likely to qualify as a refugee. But asylum officers are not good at this. They approve more than 80 percent of the people they interview as having a “credible fear” of persecution. I’ve sat in on these interviews. The alien says: ‘I have a fear of my government because I disagree with my government’s politics.’ There’s no evidence, there’s no contrary story. So, even though only 15 percent of those claiming asylum end up qualifying legally as refugees, more than 80 percent of them clear the initial hurdle and are allowed into the country.

Once past the initial hurdle, an alien is released from custody and sent on his way to apply for full asylum through an “immigration judge.” For the few aliens who show up, it’s a court-like process. The alien, with an attorney, gives his story. The government gives any facts to the contrary. This process is absurdly backlogged. More than 600,000 applications for asylum are currently pending before immigration judges, meaning many aliens wait years before they are granted (or, most commonly, denied) full asylum status. Full asylum status allows immigrants to later apply for permanent resident status, with all the freedoms (travel, work) that accompany it.

To clean up the backlog, the administration has proposed letting asylum officers consider the full asylum claim. And the asylum officers would do this without an adversarial proceeding. What does this mean? If an alien shows up to the border and claims asylum, the alien will be given legal status and work authorization, without rigorous review.

That is an unimaginable invitation to enter the United States illegally.

The proposal comes with additional eyebrow raisers. For example, although border crossers are required to be detained through their initial credible fear hearings, the proposed rule would skirt that requirement by granting “parole” into the U.S. where detention is “impracticable.” The rule acknowledges that many people won’t show up to their credible fear hearing. As another example, the rule treats the credible fear hearing as an application for work authorization, despite the fact that this will transfer jobs away from U.S. workers.

Thus, the rule treats a problem—too many ‘asylum seekers’ who aren’t legitimate—by ushering everyone in more quickly.

The better solution is to have a more rigorous standard at the front end, or to process asylum claims safely and efficiently outside the U.S., prior to arrival.

Just as our store owner’s decision to allow shoplifting will, ultimately, bankrupt him, so too will this open-border policy crater the southern border—and the stability of the Western Hemisphere along with it. The cartels, who charge fees to cross their territories, will be further enriched. The economies of Guatemala, El Salvador, and Honduras will dwindle with every middle-class worker fleeing for work in the United States. And while processing thousands of asylum seekers, our border patrol officers will be unable to catch the drug traffickers, terrorists, or other security threats that flow over our border.

We are a kind and generous country and spend millions of dollars and man-hours to ensure safety for those fleeing violence. But our border is broken. Instead of moderating the flow of illegal traffic, Biden’s proposed policy pours gasoline on the fire.