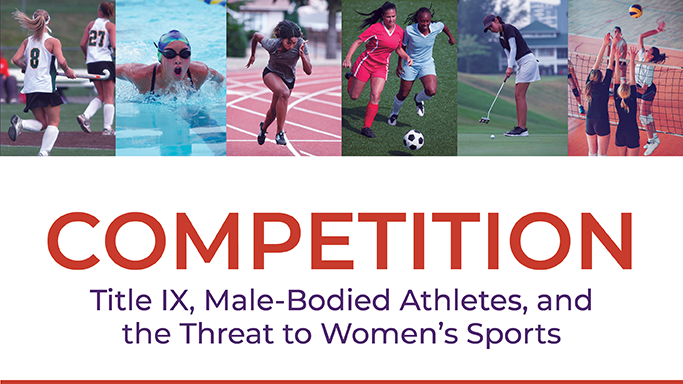 For more than a year, politicians, policymakers and athletes have sounded the alarm over the threat to women’s sports. Yet, at least 19 state athletic associations continue to allow athletes to compete as male or female according to their gender identity.

The NCAA also “firmly and unequivocally” supports the participation of transgender male-bodied athletes on women’s collegiate athletic teams, even though roster spots are limited and Title IX requires equal access for females. And at the Tokyo Summer Olympics, New Zealand Weightlifter Laurel (formerly Gavin) Hubbard made history as the first transgender athlete to compete in an individual women’s event.

But the threat to women’s sports is posed not only by transgender athletes. In some states that have adopted equal rights amendments, high schools that offer women’s field hockey or women’s volleyball must allow male students to try out for these teams, unless they offer the same sport for high school males.

This is not fair.

Competitive sport is a zero-sum game, where some athletes make the cut, others do not; someone wins, others lose. In a zero-sum competition, the inclusion of male-bodied athletes in women’s sport inevitably means females lose out.

– Summarize American law regarding sex discrimination and athletics
– Analyze the evidence regarding physiological sex differences and the male-female athletic gap
– Review testimony from female athletes who have competed with or against male-bodied athletes.

Why did we spend months compiling this information?

Because political slogans don’t tell the whole story. In order to move the needle on this issue and help athletic associations, policymakers, and courts understand the threat to female athletes and women’s sports, we need to ensure that no individual, expert, or policymaker can misrepresent the truth: that single-sex sport is the only way to preserve fair athletic competition for women.

That’s why we made this report free and easy to download, so you can review it, share it, and come back to it when you need the well-sourced facts.

Common sense tells us that allowing biological males to compete with and against females puts women at a significant disadvantage in most sports. This report provides the scientific, legal, and anecdotal evidence you need to back up this conclusion.

This should be obvious. But sadly, to many, it’s not. With this report, we hope to change that. Speaking Up Against Unfairness in Women’s Sports