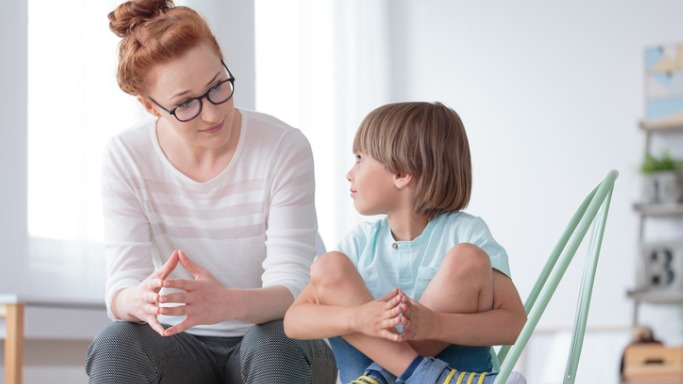 Just before his 13th birthday, Deserie Thomas’s son began succumbing to gender ideology. She had noticed that he was exhibiting feminine tendencies, but she didn’t think much of it at the time. His best friend was a girl, so she chalked it up to the feminine influence in his life.

Little did she know that her son was living a completely different identity away from her home—at school and on the internet. He had taken on a new name and new pronouns and had decided that he was a girl trapped in a boy’s body. At least, that’s what he had been told repeatedly by therapists, medical professionals, and school officials who not only sold him the lie that is gender ideology but encouraged him to live that lie away from his family.

Things started to go downhill for Deserie’s son when she mentioned to her son’s pediatrician that she had observed in him some girlish behavior. The pediatrician recommended that she take her son to a teenage behavioral specialist, promising her that the specialist would be able to help. Thomas followed the pediatrician’s recommendation and paid a visit to the specialist. Within the first 10 minutes of their meeting, the specialist announced in front of Thomas and her son that she was writing a prescription for puberty blockers so that “when he wants to transition to become a girl, it will be easier.”

Thomas had the wherewithal to decline the prescription and remove her son from the situation immediately. But the damage had already been done: It had been burned into her son’s brain that transition was an option and that no one was going to stop him.

What followed was a long back-and-forth battle to find a counselor who would help her son rather than affirm the lies he’d been told. Deserie took him to four different counselors, only one of whom was non-affirming. The other three, including one employed by a Texas state agency, were intent on transitioning her son for her. During her first meeting with the state therapist, for example, the therapist asked both Deserie and her son, “What would it hurt to call him by his female name?”

Deserie ended up taking her son to a psychiatrist who had been another recommendation from her son’s pediatrician. Shortly after sitting down with Deserie and her son, the psychiatrist said, “I see in my notes that you like to be called a different name.” When Deserie protested, the psychiatrist insisted that affirming her son’s new gender identity was the only possible solution.  So Deserie ended the visit. But the psychiatrist began following her down the hallway, referring to her son by his preferred female name, saying, “Lizzy, Lizzy, it’s OK. Listen, ma’am, this is how we help.”

Shortly after that visit, Deserie received a call from Child Protective Services. The agent said they had received a report from the psychiatrist, who accused Deserie and her husband of failing to provide her son with medically recommended care and opening him up to possible sexual abuse. Keep in mind: this psychiatrist spent less than five minutes total with Deserie and her son. She knew nothing about this young man or his family yet was willing to sic the government on them with allegations she fabricated.

Thankfully, the CPS agent assigned to Deserie’s case understood the situation. The agent came to Deserie’s house, met with her, her son, and her husband all together, and ultimately dropped the case a week or two later after finding no evidence of abuse against him. In other states, where abuse could be defined as not using preferred pronouns or providing medical and hormonal care, this case could have gone very differently—and Deserie knows that.

All she wanted for her son was a neutral source who was willing to look at her son for who he is: a confused and impressionable young man somewhere on the spectrum who got caught up in the wrong crowd. “If he grows up to be an adult and that’s truly who he believes he is, then OK,” she told me. “But I don’t want changes to be made while he’s still forming opinions about his life.”

Instead, what she got was a band of adults who tried to force gender ideology on not only her son but her entire family, and then punish her when she refused to go along with it.

It took three years for her son’s school to finally ask for parental permission to start referring to her son by his preferred pronouns and name. When Deserie denied that permission, she was yelled at by the school’s principal. One of her son’s teachers even introduced herself to the entire class before the start of the school year by asking them ahead of time which pronouns and names they wanted to go by. Not one student or teacher had asked for this, Deserie said—it was the teacher’s idea, and the families weren’t consulted or even informed.

This is what parents are up against. Gender ideologues tried to use the power of the state to silence Deserie and even put at risk her right to raise her child, all because she believes that there are two biological sexes and that her son was born male and cannot become female. These are basic facts that everyone agreed were true up until, well, about five minutes ago, when the Left decided to take gender ideology and turn it into a political opportunity.

Today, Deserie’s son is still struggling with his identity. But she knows who he is, and she believes he does as well. At home, at work, and around extended family, he’s still the same young man he always has been. It is only when he goes to school or hangs out with a specific circle of friends that his identity changes. Some might claim this is because he’s scared to be his “true self” among people who won’t affirm it. But no one knows a child better than his mother, and, unlike the adults who have pushed this ideology on her child, Deserie Thomas knows her son. More importantly, she loves him.