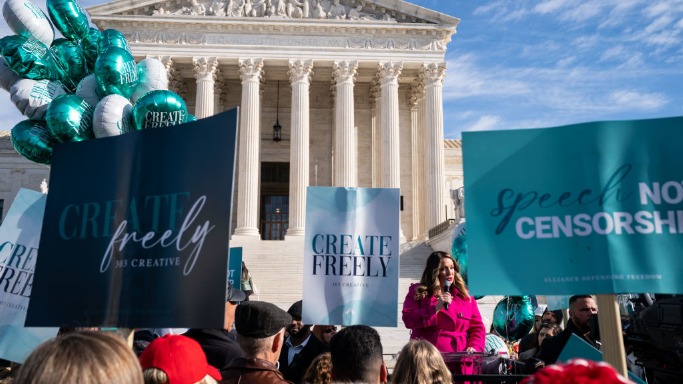 Compelled speech is not free speech

What happened during 303 Creative’s case before the Supreme Court

Earlier this week, my colleague Kristen Waggoner argued 303 Creative LLC v. Elenis in the Supreme Court of the United States for Alliance Defending Freedom. From the oral argument, it seemed that a majority of the Supreme Court justices were committed to reaffirming the First Amendment’s free speech guarantees. Those principles—the promise that every American is free to believe, think, and speak consistently with their deepest convictions—are foundational to our ability to govern ourselves.

Lorie Smith is a Christian website design artist, and her faith influences all aspects of her life, including the websites she creates. She decides which projects to design based on the message requested and never on the identity of her client. As a believer, she can only create custom websites consistent with her faith.

At the outset, this case is about speech. Protections against discriminatory conduct against LGBT individuals will remain in place. In this case, Colorado goes further, claiming the power to force Lorie to say something she doesn’t believe about marriage—even if doing so violates her religious beliefs. 303 Creative thus raises deeply significant questions about whether government may force people to speak and promote messages with which they disagree.

The parties (Colorado and Lorie Smith) and the lower courts all agree that Lorie is willing to serve everyone regardless of their race, religion, or sexual orientation and that she will gladly create custom websites for anyone, including her LGBT clients. The parties and the lower courts also agree that Lorie’s custom wedding websites use words, pictures, and graphics to tell a couple’s unique love story. Lorie’s websites are, in a word, speech. But Colorado says it may force Lorie to say something she doesn’t believe.

In a staggering decision, the U.S. Court of Appeals for the Tenth Circuit held that Colorado may force Lorie to speak in violation of her most deeply held convictions. Judge Tymkovich, who disagreed with the ruling, was right to call government-compelled speech an “existential threat to the most sacred freedoms.”

Colorado’s argument would relegate every commissioned speaker, every writer, artist, photographer, and mom with an Etsy side hustle to second-class First Amendment status.

Yet, when arguing before the Supreme Court, Colorado went even further. Colorado now argues that the First Amendment does not apply at all because its public-accommodation law applies to sales transactions. But this argument would relegate every commissioned speaker, every writer, artist, photographer, and mom with an Etsy side hustle to second-class First Amendment status. As several justices noted at oral argument, it would mean that a Republican speechwriter could be forced to draft a speech for a Democratic candidate and vice versa.

At oral argument, the justices pressed Colorado on its position that the state could force Lorie to imagine, create, and publish messages that violate her conscience. Justices Gorsuch emphasized that Lorie objects only to the what (the message) and not the who (the person). Indeed, the Biden Administration conceded that the First Amendment protects artists and speakers who decline to speak messages they would refuse to speak for anyone—unless that message involves Christian beliefs about marriage.

Hypotheticals from Justice Barrett showed the Biden Administration’s error. Lorie’s attorney explained that she cannot design wedding websites for heterosexual couples that violate her religious beliefs any more than she can design a same-sex wedding website for anyone. For Lorie, it is the message, and not the person that matters.

The oral argument in this case showed just how suspect compelled speech is in the Supreme Court’s jurisprudence. And for good reason. As Justice Alito has explained for the Court, when speech is compelled, “individuals are coerced into betraying their convictions.” Or in the words of Frederick Douglass, “Liberty is meaningless where the right to utter one’s thoughts and opinions has ceased to exist.”

The freedom to speak is the essence of self-government. It grounds our political system. It furthers the search for truth. As the Supreme Court put it in New York Times v. Sullivan, the First Amendment reflects “a profound national commitment to the principle that debate on public issues should be uninhibited, robust, and wide-open.” The Court thus has long held that it is “a basic First Amendment principle that ‘freedom of speech prohibits the government from telling people what they must say.’”

303 Creative tests whether that foundational principle remains true today. It is about much more than marriage. For the sake of all Americans, it is imperative that the Supreme Court preserve our right to choose when to speak and when to remain silent.