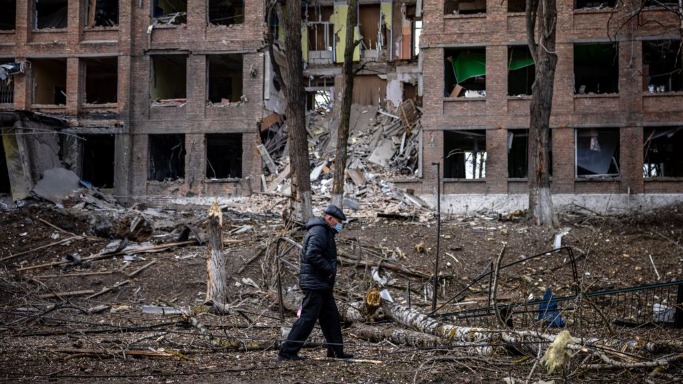 Vladimir Putin’s ground invasion of Ukraine has been a disaster for him. Since Russia’s wholesale military assault began in February, the Ukrainians have fought back with ferocious determination, relying on an arsenal supplied largely by the U.S.

So Putin is falling back right now on visiting maximum misery on Ukraine—bombarding Ukraine’s civilian infrastructure with missiles and drone strikes, cutting off power, heat, and water as Ukraine heads into deep winter. That might look like sheer wanton destruction; the revenge of a thwarted Russian despot. But there might well be more to it. Is this basically a holding action while Putin waits for a major international distraction to the U.S.?

Do not for a moment forget the threats also emanating from China.

For insights into Putin’s war on Ukraine, it’s vital to keep in mind the bigger world picture, especially Putin’s strategic partnership with China. That’s clearly not “limitless,” despite the claims of the two dictators that there are no bounds to their joint efforts to supplant an American-led free world order. But it’s also clear that Putin and Xi cooperate in some big ways, including Russia’s oil sales to China, joint military exercises, and pervasive efforts of this China-Russia axis to undermine the Pax Americana that has brought relative peace and great prosperity around the globe since World War II.

In February, at the Beijing Olympics opening, Putin and Xi met in person to jointly declare their ambitions to preside over a new world order. In September they met in Samarkand, a chance to speak face-to-face about matters veiled in secrecy. We can make a reasonable guess that their secret talks included an opportunity to discuss timetables for coordination against the West.

Which brings us to China’s growing threat of war in Asia.

Xi at the October congress of the Chinese Communist Party effectively consolidated his rule as dictator for life. China has been engaging for years in a massive military buildup, dramatically accelerated since Xi rose to power as communist party boss in 2012. A generation ago, China was a minor naval power. Today, China continues to rapidly expand a huge navy that threatens freedom of navigation and the forces of America and our allies in the Pacific.

While Xi’s ambitions are global, he has made it clear that one of his top priorities, central to his agenda, is to seize Taiwan—a thriving, strategically located Chinese democracy. Xi carried out a dress rehearsal for a military blockade and massive assault on Taiwan this past August, just after House Speaker Nancy Pelosi visited Taipei. We should believe Xi is serious, and we should treat this threat as extremely urgent, especially after his wholesale obliteration in 2020 of the rights and freedoms China promised for 50 years to Hong Kong following the 1997 British handover of the former Crown Colony.

Since 2020, Xi and his communist party comrades have layered monstrous COVID restrictions on top of their already brutally repressive surveillance state in mainland China itself, in the name of waging “war on the virus.” That “war” now appears to be winding down, since widespread protests against the COVID testing and lockdowns erupted in China last month. There is every likelihood that Xi will be ginning up a new war, to divert domestic anger against his ruling communist party. His military forces have already been courting conflict, from India to Japan to the Philippines, along with the threats to Taiwan.

If Xi Jinping goes ahead soon with an attack on Taiwan, or some other major military action in East Asia, the U.S.—a critical backer of Ukraine—will be presented with two fronts, a much bigger challenge, and potentially a relief for Putin.

Biden and his team have been treating this threat as clear, but some distance off. Their focus has been on arming Ukraine, though even that has entailed slow-walking arms and constraining Ukraine from “provoking” Russia (a recipe not for winning the war, but for prolonging it). Last month, the Wall Street Journal published an article on the growing backlog of U.S. arms sales to Taiwan, which has grown to more than $18 billion from $14 billion a year ago. This year’s annual report of the U.S.-China Economic and Security Commission cites, as just one example of the problem, the delay in deliveries to Taiwan of Stinger anti-aircraft missiles (for which Taiwan has already paid) due to “demand related to the war in Ukraine.” The report warns that the U.S. simply does not have the production facilities to supply the quantities needed. The same applies to dwindling stocks for a range of munitions.

This is inexcusable, and profoundly dangerous. It is also surely of interest to Beijing, as yet another signal of a weak or complacent U.S.

There are echoes here of the 1930s, when the U.S. failed to arm for the conflagration ahead—until we were finally hit in 1941 with Pearl Harbor. As a general rule, it is better to deter a war than end up having to fight it. That means building up a military with the power and resources to deter enemies. It also requires leadership with enough credibility and backbone to face them down.

Yes, Washington now proposes to spend more on the U.S. military than last year. But with dwindling ammunition stocks, a military immersed in “woke” priorities, and a navy increasingly under-resourced to stand up to China’s massive buildup, we have not begun to ramp up nearly enough. Biden’s focus remains on the domestic “transformation” of the U.S.: choking our fuel production, emptying the Strategic Petroleum Reserve, and failing to enforce the southern border (which sends a signal that Xi surely reads as gross weakness).

The answer is not to reduce support for Ukraine in order to beef up the arming of Taiwan and our forces in the Pacific. The answer is that America must wake up to the howling need to take seriously the defense of a world order on which our own freedoms depend. The answer is to turn with enormous energy, far more resources, and greater foresight to ramping up the U.S. military, speeding up military production, getting the necessary arms to Taiwan now, supporting Ukraine fully enough to defeat Putin, and genuinely deterring Xi. That would be costly, potentially requiring resources now slated for welfare and windmills. But it’s a good bet that it would not be nearly as costly as Biden’s current course of too little, too late to stop China. Which might just be what Putin sees as his ace in the hole.

Watch Claudia speak on this issue on Cavuto: Coast to Coast below: