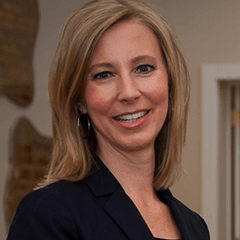 President and CEO of the Goldwater Institute

For conservatives down in the dumps over the seemingly inexorable expansion of the power of the federal government, Darcy Olsen brings a hopeful message: the battle against federal encroachment can be fought and won in the states. “We can use state constitutions to fight back against what is happening in Washington,” Olsen says.

Olsen is president and CEO of the Goldwater Institute in Phoenix, Arizona. A recent state-level victory illustrates Olsen’s point: despite the dire warnings of labor lawyers, who said that Goldwater didn’t have a chance against powerful labor unions, the institute championed the Save Our Secret Ballot amendment to the Arizona state-constitution. It guaranteed the right of the secret ballot for individuals voting whether or not to have a union shop. The amendment was adopted in 2010.

“State constitutions are packed with provisions for liberty,” she continues, “and a lot of conservatives will be thrilled to learn from this conversation that the U.S. Constitution is a floor for liberty, not the ceiling. So, using our state constitutions, we can provide greater protections for religious freedom, free speech, freedom of the press, fiscal issues, privacy, health issues, and labor issues.”

The Goldwater Institute was founded in 1988, with the blessings of the late senator, presidential candidate and conservative standard bearer Barry Goldwater. George Will has hailed the Goldwater Institute for its outstanding leadership in what the Pulitzer Prize-winning columnist called “the liberty business.” Steve Forbes of Forbes magazine has called Goldwater “a model for others around the country fighting for freedom.” More colloquially, the successes of the institute’s legal team led Phoenix magazine to dub Goldwater “a ninja-lawyer squad.” Olsen, who has been described as a visionary, became head of Goldwater in 2001.

It is fair to say that Ms. Olsen, 41, has a novel resume for the CEO of a free-market organization that is accustomed to winning tough battles–or “duking it out,” as Olsen puts it–in the the courts. Olsen worked as a drug counselor for the Coalition for the Homeless, an advocacy organization in Washington, D.C., while working for her bachelor’s degree from Georgetown University’s Edmund A. Walsh School of Foreign Service. She has a master’s degree in international education from New York University.

Nor surprisingly for a former drug counselor, Olsen says she has always had “a liberal heart.” Olsen’s liberal heart already was evident when, the future Goldwater CEO, aged 10, wrote a letter to President Ronald Reagan. Homelessness was a big issue and Olsen, traveling across the Midwest with her family, saw open space and what looked like a way to solve the problem of homelessness. In her letter to Reagan, she suggested that the government build houses for the homeless in the Midwest, an expensive undertaking, to say the least.

Like most ten-year-olds, Olsen had not realized that “to give money [for such projects], you either have to create money or take money from somebody.” The college-aged Olsen, an ace debater, still had a liberal heart but she found herself being bested in arguments by libertarian friends. “It’s not my debating skills,” Olsen thought. “They must know something I don’t know.” Open minded, she took a course from Intercollegiate Studies Institute (ISI) that introduced her to free-market economists Friedrich Hayek, Frederic Bastiat, and Ludwig von Mises and proved an intellectual milestone in her development.

Olsen then took an unusual route to becoming the leader of an important free-market institution. After a stint as a copyeditor for a university in Utah, Olsen joined the Cato Institute as an editor but soon became a policy analyst. The word “meteoric” might apply to Olsen’s rise in the free-market, libertarian world. When she was hired by Goldwater, she replaced Jeff Flake, who resigned to run for Congress. With Olsen at the helm, the Goldwater Institute has continued to rack up important victories against government overreach. She also has an eye for talent. Olsen hired Clint Bolick, the prominent libertarian lawyer, who last year joked to Townhall, “I get paid to sue government bureaucrats.”

As might be expected for an organization led by a woman with a degree in international education, the Goldwater Institute has also been extremely creative in the field of education. The institute has pioneered education savings accounts that are similar to health savings accounts. The program makes available more funding to be used at the discretion of the parents. If all the money isn’t spend it a year it can be carried over and ultimately used for college. That would give the schools incentive not to raise their tuition fees just because money in available. The governor of Arizona signed the Education Savings Accounts bill into law two years ago and expanded accounts this year. ?

The Goldwater Institute currently is engaged in a lawsuit challenging the constitutionality of the Independent Payment Advisory Board (IPAB), an unelected board included in the ObamaCare law that will have unprecedented power. The IPAB will ration care and set prices. Another state-initiative that could have a profound impact on a national level is the Goldwater Institute’s Compact for America, a creative way to fix federal debt. The Compact aims to enact a federal Balanced Budget Amendment through state legislatures. “If approved by 38 states, the Compact would require the federal government to obtain the approval of the majority of legislatures to green light any increase above an initial debt limit. In other words, 26 states would have to cosign for the federal government’s credit card,” the Goldwater Institute explained in a press release. “The Compact doesn’t wait around on Washington to initiate balanced budget amendment,” Goldwater’s Nick Dranias said in a speech in Florida.

If Olsen’s belief in the power of state initiatives to curb federal expansion gives beleaguered conservatives and libertarians hope, her private life gives hope to women who want both careers and children. Olsen is the adoptive mother of two small children whom she met when she became their foster mother. “My baby girl will turn two on October 3,” she says, “and that was the same day that the court gave me to finalize the adoption of my little boy. They are six months apart, so they are basically little twins.”

It came to Olsen that she wanted to become a foster mother while in prayer. Originally, Olsen intended to foster teen-aged girls, but the authorities ruled that her loft-style house didn’t have enough bedroom space for teen-aged children. She received one of her children when the baby was two weeks old and the other as a thirty-six-hours-old newborn. It dawned on her that, if the children became available for adoption, she wanted them to stay with her. “It’s the greatest decision I never made,” she jokes. Olsen has not ruled out the possibility of enlarging the family. She will foster again.

She says that having kids has made her more aware of how work schedules affect families. “Libertarians or conservatives, we often talk about how important family is and then work people to death. It’s important that we practice what we preach. You can be a brilliant leader and run the Cub Scouts at the same time,” she says. She is temporarily doing more work from home, but that will change when the children are old enough for school.

When Olsen adopted her children, she called her senior staff together and said that, if anybody felt she was not available enough because of her maternal duties, to let her know—even anonymously—and she would gladly step into a different, lower-paying position at the Goldwater Institute. So far, we understand, there haven’t been complaints—anonymously or otherwise. Given Olsen’s outstanding record, we’re not surprised.