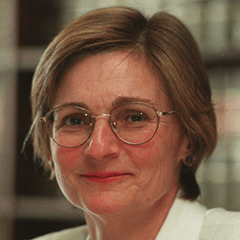 Chief Judge of the U.S. Court of Appeals for the Fifth Circuit

Edith Jones, the Chief Judge of the U.S. Court of Appeals for the Fifth Circuit, believes, like Edmund Burke, that “All that is necessary for the triumph of evil is for good men to do nothing.” Our federal appellate courts are an important line of defense against unconstitutional laws or government actions, and Judge Jones, one of the most prominent women jurists in the county, is a staunch advocate of judicial conservatism.

Judge Jones “grew up in San Antonio, Texas, the daughter of two people who came from modest backgrounds but were high achievers.” During World War II, her father attended Yale Medical School, and her mother, the valedictorian of her high school and a college graduate, attended Yale Nursing School. “As the oldest child,” she says, “I sensed that I had to earn my own way in life. My parents taught by example, living ethically and high-mindedly, with the expectation that we would do the same.”

Judge Jones’s parents “were active Republicans when Texas, apart from electing Eisenhower for president, was a one-party state for the Democrats.” Her own politics were set from a young age. “I was born conservative,” she said. “When President Kennedy was elected in 1960, I was 11 years old, and I said to myself, childishly, that I didn’t want this country to become Socialistic. Recall, of course, this was after the crushing of the Hungarian Revolution, after Castro took over Cuba, a time when Russia’s nuclear threat appeared real.”

She recalls her parents discussing politics often. “One of the stories was about the infamous Box 13 election results that launched Lyndon Johnson’s career as a U.S. Senator. A friend of ours had been with the FBI investigating this fraud, which wasn’t alluded to in polite Texas company during that period. My father had the temerity to support his friend, a prominent local attorney, for U.S. Congress as a Republican in 1961, I think. My father was thereafter subjected to a months-long IRS audit, which the agent basically admitted was politically inspired; he incurred costs defending against it, but never had to pay back taxes. My mother ran a campaign for statewide office by another friend of ours—from her kitchen.”

Against this backdrop, Jones became an outspoken advocate of conservative principles. “Although I was not attuned fully to the debates between conservative and moderate Republicans, I certainly was ‘for’ Goldwater in 1964. In high school, a couple of years later, a teacher considered me to be excessively conservative and over-optimistic, so he assigned me to read Voltaire’s Candide. By the end of high school, I was known to be interested in current events and politics and was known, I should think, as a small-government conservative.”

Despite her interest in politics, studying law was not Judge Jones’s first choice. “I came to study law as a second-best career choice,” she says. “Had I thought that I could practice medicine and have a decent family life, I’d have aspired to that. My father’s career of 70-hour workweeks, practically no vacations, and little time invested in family activities argued against that. I intended to study political science when I went to Cornell University, but unfortunately, student anti-war riots there led many stellar faculty members in that department, then the best poli-sci in the nation, to depart. Economics became my second-choice major (although I briefly profited from having Professor Thomas Sowell as an adviser—before he left).”

Jones returned to Texas and attended the University of Texas School of Law. She “never regretted the career or law-school choice.”

A Trailblazer for Women in the Law

Edith Jones became the first woman ever to make partner at her law firm—while on maternity leave with her second son. On women’s equality issues around that time, she says “Midge Decter best characterized male/female equality issues in the 1970s when she said that women’s choices are circumscribed in our own minds and hearts by one thing: the bearing and rearing of children. . . . To acknowledge this does not mean that women are disadvantaged or discriminated against by society, certainly not in today’s legal regime.”

She never saw being a woman as any impediment to her success. “The biggest ‘obstacle’ I had to overcome in ascending the ladder to partnership at Andrews, Kurth, Campbell and Jones was myself, as I attempted to manage career and family,” she says. “I am very proud of the accomplishments of the Andrews Kurth ‘good old girls,’ as I call them—the ladies who were hired within about five years of my starting in 1974. They have been wildly successful in the legal profession.”

As to legislative efforts to promote women’s equality, Judge Jones notes that she has “always opposed the ERA as being unnecessary, contrary to the fundamental distinction between men and women, and leading to unforeseeable and unfortunate consequences.” She adds, “Although the 1964 Civil Rights Act contributed to the advancement of women’s careers in society, I would have to defer to others for an overview of the impact of these equal rights laws, when balanced against factors such as the increase of out of wedlock births, the prevalence of divorce, the sexualization of society and the youth. Women’s ‘rights,’ in the end, depend heavily on what goes on outside as well as in the workplace.”

Managing life outside the workplace was key for Judge Jones in her own success. She says, “My best advice for young professional women is to work out arrangements with their husbands that will enable both to be happy while facing these challenges of childrearing and work together. . . . And that slowing down the professional track isn’t a bad thing, because life is long, all experience is useful, and one has a long time to pursue professional success but a relatively few years in which to see your children grow.”

A Judge Faithful to Principle

Ronald Reagan appointed Judge Jones to the bench in 1985. Although she never sought out a seat on the bench, she had “a keen interest in constitutional law” and wanted to “make a small contribution to the ongoing development of the federal law.”

Upon taking the bench, Judge Jones “lament[ed] that in courts like ours with a huge docket, we don’t have as much time for deep study of the deep problems we occasionally confront. The real challenge is therefore to triage the cases from the standpoint of legal difficulty while reaching the best result in all.”

Judges also face a challenge in the court of public opinion as their role has become increasingly politicized, despite the fact that, as Judge Jones says, “most of our results are essentially determined by the correct application of standards of review.” Appellate judges “cannot litigate for the parties or correct every mistake we think we perceive,” she notes. The trial record “is all we may legitimately review,” and “we are bound by standards of review that counsel deference to factfindings, support most discretionary calls by trial courts, and consider anew only pure law questions.”

Even though the proper role of a judge is carefully circumscribed, the perception that judges make politically motivated decisions has radically changed the process by which a president’s choice for a vacancy is confirmed by the Senate. “The confirmation process for federal judges has deteriorated since 1985, when I was sworn in, because it has descended into public character assassination of nominees for the lower courts,” she says. “The sources of acrimony are several, but the most important one is what Justice Scalia noted: If the Court had not involved itself for fifty years or more in matters beyond the scope of its Constitutional duties, many of which are intensely political and without clear legal answers, politicians would not have been so eager to control the makeup of the bench.”

Judge Jones disagrees with President Obama’s public remarks that the Court would be in error if it disagreed with Congress’s judgment on how much the Constitution permitted it to regulate health care. “I think the President’s recent statements about a pending case were incorrect legally,” she said. “As citizens, we have the right to criticize the Court’s decisions on grounds of law and principle. As legislators or the Executive, citizens have an additional ability to determine how to apply Supreme Court decisions with which they disagree. Defiance of those decisions, however, is a very risky undertaking prudentially and politically. Attempting to intimidate the Court is bad.”

Although a court should exercise some deference to the legislature in policing the Constitution, but that deference has limits. “Justice Marshall stated in Marbury [v. Madison] essentially that judges should place the text of the Constitution against the text of a challenged statute and consider whether they are consistent. This is a deceptively simple formula, of course, but it harks back to an era when Congress legislated only in areas that were much closer to the text of the Constitution than we see it doing today. In this more complex age, we have to rely on the words of the legislature as the best evidence of what it intended, and interpret them in light of established principles of statutory interpretation. . . . The Constitutional limits, such as they are, must be examined according to the wealth of Supreme Court case law.”

Even as the outcomes of cases become more politicized, Judge Jones says, “I still hold out hope that most people view ‘the courts’ as fair arbiters of cases. The exception to this may lie in especially contentious areas where, as noted above, courts should not be engaged because there are no real guiding political principles. The way to ‘depoliticize’ such disputes is not to allow them to be handled as lawsuits to begin with. Otherwise, for most disputes, American courts remain a beacon of impartiality. . . . [T]he perception of fairness is as essential as the reality. It does not help that many journalists, being pretty ignorant of the law, describe cases simply in terms of winners and losers, ascribing political significance to the results without understanding why they occurred. It does help, in my view, when the courts conduct as much business as possible in the open, with hearings, rather than issuing orders through intermediaries and decisions on the papers without ever having seen the lawyers. I don’t include televised proceedings in this last observation because they tend to make a circus of the process.”

What is Judge Edith Jones’s favorite part of being a judge? Her clerks. Like most federal judges, Judge Jones hires several young law graduates each year for a prestigious one-year position assisting her with research and drafting. “My favorite part about being a judge has been the opportunity to befriend, mentor and follow the careers of more than 75 law clerks during my tenure thus far. They—and their spouses and children—are an extended family of whom I’m very proud. If I leave any legacy, a large part of it, I hope, would be in conveying inspiration and motivation to the clerks to preserve, protect, and defend our Constitution.”

To paraphrase Burke, evil cannot prevail as long as we have women like Judge Jones doing their part.