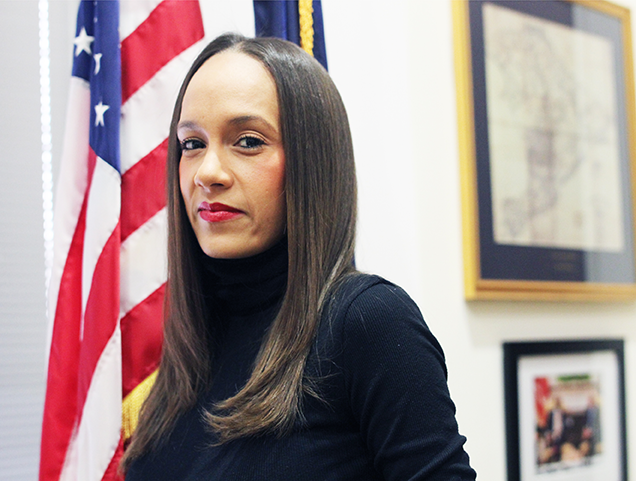 Usually bursting into tears during an interview is not the formula for landing that dream job.

But then-Congressman-Elect Tim Scott hired Jennifer DeCasper, who is now his chief of staff, despite the lachrymose moment. DeCasper is described by Roll Call magazine as one of the Hill’s black women staffers who is among the “movers and shakers” of Capitol Hill. She is the first African American to serve as a Chief of Staff to a United States Senator.

It says a lot about both DeCasper and Scott that they looked past the initial awkwardness and could see what really mattered. “It was the worst interview of my life,” DeCasper laughingly admits of her first encounter with her future boss. “The Senator said something in the middle of the interview that just really tugged a heart string and I just lost it.”

DeCasper was highly qualified—a law degree from the University of Michigan, a resume that included previous Hill experience and a stint as a prosecutor in Colorado. Still, she was in a career slump. DeCasper was working as a TSA gate agent at Dulles. DeCasper wore a fluorescent yellow vest and carried the orange sticks in her hand. A stranger had given her resume to Scott. To this day, she has no idea who did this.

“I gave [Scott] my best professional answers to his questions,” DeCasper recalls of the interview, “and then when he started talking about his faith and his journey, I just lost it. And he was completely shocked as one should expect. I interview people all the time now and if somebody started crying, I’d be like ‘Oh my goodness, what’s happening?’ And so, he asked me, ‘Do you want to talk about it? And I said no, I would like to end this interview and he said, are you sure? And I said absolutely. And it was almost like he excused me from the dinner table, and I got up and left and called my dad and said I definitely did not get that job and a week later they called me and hired me.”

Some people with high-powered a job on Capitol Hill might be tempted to gloss over having worked as a TSA gate agent at Dulles. Not DeCasper.

Why did Senator Scott overlook the awkwardness in what should have finished DeCasper’s hopes? “I would say a year into my job, I finally got comfortable enough to ask him, ‘Sir, why on earth would you hire me [after that interview]?’

“He admitted it was the most awkward interview he’d ever had,” she tells IWF, “but he went home and prayed about it and felt led to hire me. He felt that he was being told that I was going to be a big part of his team, and help him get to where he wanted to go, and help carry out his agenda, and hopes and dreams. But I did seem like a mess, and he has joked about it—he said he even asked, ‘God, are you sure?’

It turned out to be a great hire, with DeCasper and her boss on exactly the same wavelength: Her National Journal bio, for example, describes DeCasper as a staffer who “champions fiscally conservative legislation to alleviate poverty and boost opportunity in low-income communities”—which sounds a lot like the South Carolina Senator’s “opportunity zones.” DeCasper was Scott’s right-hand woman on this project. “The idea for opportunity zones literally was sparked in our office,” DeCasper says. “The boss was already a big believer in Jack Kemp-ish policy and it had a very Jack Kemp feel. We liked the idea and we rolled it out, and we had no idea how we were going to pass it.  Then the tax bill came around, we knew that that was our opportunity and it passed.”

Scott and his Chief of Staff are also on the same page when it comes to emphasizing diversity in hiring. “I’ve always been a big believer in that,” DeCasper tells IWF. “I agree you should never hire anybody for a specific character trait, or gender, or race. I think that that’s just setting somebody up for failure. And then a lot of times what you end up seeing is that it almost validates a stereotype. I never want to do that, and so I make sure that whoever I hire is, first of all, smart and competent, and then if they happen to be X, Y, or Z, then great. But I operate with the ideology that – and my boss does too – that we can’t craft meaningful legislation that impacts diverse communities unless we have diverse input.”

She explains, “There have been many times where the senior staff will sit around, discussing an idea and then somebody will say, ‘Well, how is that going to impact the Hispanic community?’ And we’ll say, ‘Oh, we didn’t see that angle, that’s a good point.’ And there are times when I’ve said ‘Single mothers aren’t going to like that.’ I’m a single mother, and I can bring that perspective to the table. I think that there are attributes that everybody has that can play into good legislation, and if you have a homogeneous staff, then you’re not going to fully craft legislation designed for diverse communities. And most Senators don’t have a completely homogeneous state. I mean, sure there are some that are less diverse than others, but if you want good legislation, you have to have lots of input, whether it’s experiences as a black person, or a single mother, or, my finance person who is a black man who is also paralyzed.”

“He is in a wheelchair. One day he went to staff the boss at a committee hearing, and there was no place for him. You know why? Because there wasn’t a ramp built and nobody in the history of the Senate had thought to build a ramp. So, there are changes like that that I think that we’ve been really good at making, whether it’s in everyday life in the Senate or policy for the country.”

DeCasper was born in Lincoln, Nebraska but grew up in Colorado. “My mom was a teenage mom and she ended up staying home and raising three girls and my dad was a garbage man. And he worked his way up to the top, but he stayed in the garbage industry for his entire life.  I lived just your average middle-income life in Colorado Springs, Colorado.” Her favorite college professor at Colorado Mesa University knew she wanted to work on Capitol Hill and helped her get an internship in the office of Colorado Republican Senator Wayne Allard. She recalls, “I loved it, I got bit by the bug, I came back to college and graduated.  And right before graduation they called me and offered me a job to come back to D.C. to be the assistant to the chief of staff. And so, I graduated, and I think I was back in D.C. a week later.” She worked for Allard from 1999 until 2002.

While in the Allard office, DeCasper started considering law school. When there was an anthrax scare on Capitol Hill, and staffers, who had had to leave the office in a hurry, were told they could have one object fetched from their desks, DeCasper asked for her law school applications.

After DeCasper burst into tears ta her initial job interview, she was surprised to get the job. Scott felt “led” to hire her but asked, “‘God, are you sure?’”

She was accepted at the University of Michigan, a top ten law school, and after graduating went back to Colorado to serve as a deputy district attorney. “I was proud to be a prosecutor,” she says. “It’s a hard job and it takes a special kind of person, I think, to be able to leave your work at work and I was honored to wear what we call the white hat and to carry out justice and, in my opinion, justice didn’t always mean that you won a case. Justice meant that you helped somebody get the help that they deserve, or get their life back on track, or give them chance number two, or chance number three, or chance number four. And so, for me, that was really, in my opinion, the Lord’s work and I got to be a part of it.  Then at some point it got a little more difficult.”

She continues, “I was handling cases where children were involved in sex abuse-related cases and it just got very difficult for me. At that time, I had a kid under two and I think what did it for me was the time I was sitting at home going over a case where a two-year-old had died and I had the pictures. I’m looking at my kid and I’m looking at the pictures, and I just knew this is not how I want to help the world and I knew that I wanted to go back to the Hill.”

Just as the job market was tanking, DeCasper came back to D.C. It was at this point in her life that she was hired as a gate agent at Dulles Airport. Some people with a job on Capitol Hill might be tempted to gloss over that interlude. Not DeCasper.

“That was a great job for me because it actually taught me how to serve in a way that I never saw myself serving,” she says. “What’s interesting is a person at a law firm where I once interned asked me to carry her bags and she didn’t even recognize me. And that’s when I knew that you should treat everybody with respect because you don’t know who you’re handing your bags to. You don’t know what path they’re walking on. I learned so many lessons at Dulles. I learned how to be a better person. I learned how to serve. I learned how to find joy in your work, to find integrity in your work. And I’ll never ever forget Dulles. It was actually probably my greatest job.”

When you meet somebody who has a high-powered job on Capitol Hill but can see the human value in her previous job as a Dulles gate-agent, you know you’re in touch with a woman who has her values straight. Jennifer DeCasper is such a woman. She has one more career move planned: she ultimately aspires to wear shorts everyday as a bartender in Florida. Just a few more national problems to work on with the boss before that, though.