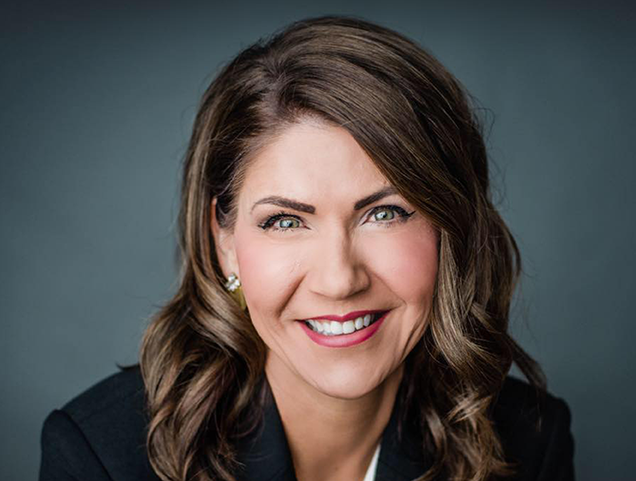 As blue state governors seemed to vie with each other to impose the most draconian shut-down regime, Governor Kristi Noem of South Dakota took a novel approach: inform the people and trust them to make their own decisions.

In a way, Noem is the anti-Gretchen Whitmer—or maybe Michigan Governor Whitmer, who became famous for her heavy-handed COVID-19 crack-down, is the anti-Noem. Two women, two states, and two very different ideas about governance. Noem had a scientific and legal team advising her on COVID-19, but decided on information instead of heavy-handed rules.

“My approach to this virus was to provide South Dakotans with all the information that I could, and then trust them to exercise their freedom to make the best decision for themselves and for their families,” Noem told reporters. Noem did not issue stay-at-home orders or shut down businesses. The state provided up-to-date information on the virus, including trend data, precautions, and testing. She encouraged South Dakotans to follow CDC guidelines but did not order them to do so. Most infuriatingly to many, Noem allowed the first statewide trial of the controversial malaria drug hydroxychloroquine.

It was a pouncing moment for left-leaning pundits.

“You are aware that [COVID-19] is infectious, right? That it’s a communicable disease?” MSNBC’s Rachel Maddow sneered. The far-left Daily Kos opined that the Governor of South Dakota “proves herself a damn fool.” “To much of the rest of the country, South Dakota’s governor looks awfully like an ideologue sacrificing lives on the anvil of Trumpology,” declared the U.K’s lefty Guardian.

To its credit, the Guardian quoted a South Dakota political scientist saying that Noem “is probably where most South Dakotans are, in that they don’t want to be dictated to that they have to follow highly restrictive rules when the virus is yet to make a major impact on most people’s lives.”

Noem was undaunted. “I took an oath when I was in Congress, obviously, to uphold the Constitution of the United States,” Noem told Fox News. “I believe in our freedoms and liberties. What I’ve seen across the country is so many people give up their liberties for just a little bit of security, and they don’t have to do that.”

“My approach to this virus was to provide South Dakotans with all the information that I could, and then trust them to make the best decisions for themselves.”

Noem worries that some governors exceeded their rightful authority. “If we allow governors, leaders, mayors to make decisions that they don’t have the authority to make and do a taking of someone’s business, infringe on people’s constitutional rights, that’s wrong and we need to stop and make sure that we don’t allow that to continue because it really would take away what has made America the best country in the world,” she argues.

It is difficult to compare the sparsely populated South Dakota’s results to other states. COVID-19 clearly thrives in densely populated places such as New York City. But it can be said that the state is faring relatively well. There have been 5,742 reported cases of the virus, 4,755 recoveries and 74 deaths statewide.  This includes a number (around 800 cases and 2 deaths) from a Smithfield pork-processing plant in Sioux Falls. The plant became a national coronavirus hotspot, giving media outlets yet another pouncing moment. The plant, however, was deemed essential and would not have been affected one way or the other by a shut-down order from the governor. The plant was closed briefly.

Bucking the national trend, seven governors, all Republicans, did not issue strict stay-at-home orders. How does Governor Noem think that this worked out in South Dakota?

“That’s a hard thing to answer because we did have some people who were very impacted by the virus,” Noem tells IWF. “We have families who lost loved ones. We have real situations where people’s hearts are broken today. So, while every single state was dealing with the exact same situation, I do think South Dakota is doing better today because of the decisions that we made, because we worked together and we relied on personal responsibility, but we also have less job loss now today because we allowed our businesses to be innovative and continue serving their customers. We didn’t issue a shelter in place, which I think gave people more peace of mind and the ability to take care of their family’s needs. I think our economy is going to rebound a lot quicker than any other state.”

Noem took a lot of flak nationally for her stance, but it doesn’t bother her. For Noem, everything goes back to the family ranch, a world away from Washington, D.C., and the punditocracy. “I would say the vast majority of my decision-making is influenced by my background, my life growing up on a farm and ranch in South Dakota, just mainly focused on the freedoms and liberties we have here in America. And then the problem-solving that my parents taught me. My dad was a cowboy. He said to us kids almost every day you don’t complain about things, you fix them.  He really respected government, and the Constitution. That’s how I was raised.”

She is married to Byron Noem, charmingly listed as South Dakota’s First Gentleman by the National Governor’s Association, also a South Dakota native, who grew up working on the family farm. He founded a crop insurance agency and in his spare time coaches high school basketball. The Noems have three children, Cassidy, Kennedy, and Booker.

Kristi Arnold grew up on the ranch in Hamlin County. She went to church, hunted and was elected South Dakota Snow Queen in high school. Noem believes that being Snow Queen helped her hone her public speaking skills.

In 1994, when Kristi was a 22-year-old student at Northern State University, and already married to Byron Noem, her father, Ron Arnold, was sucked into a giant grain bin.  Local farmers came running to try to extricate Arnold from the bin, but it was useless. “He was the kind of guy who could do anything,” Noem told a reporter. “He was indestructible. We had spent our lives watching him do crazy stuff, and have all kinds of crazy stories about him. So, you just never thought he could get hurt or anything could happen to him.”

For Noem, everything goes back to the family ranch, a world away from Washington, D.C., and the punditocracy.

Ron Arnold’s unexpected death changed Kristi’s life. “When my dad died, he was only 49 years old, so it was overwhelming to our family,” she tells IWF. “I was still going to college, and my sister was living in Georgia, my brother was living in Oklahoma, and my youngest brother was still in high school, so we got together and made some decisions as a family within a day or two of dad’s death.  It was just decided that I would be the one who would quit college and come home and become the general manager of the operation. I mean, it was overwhelming, I would say. We had a large operation and a lot of decisions. My dad, from the time we were little, gave us kids impossible things to do. He gave us things that we never thought we could accomplish and then when we did, though, we built confidence in ourselves. We figured out how to solve problems, and I think that was probably the best gift he could have possibly given us. It prepared us to think on our feet, to not look at hard things as a bad thing, but to look at them as challenges that need to be overcome and to solve a problem going forward.”

Expecting her first child, Noem found herself in charge of a ranch with more than four hundred head of cattle and a large grain inventory. Throwing herself into saving the family legacy, Kristi appended a restaurant and hunting lodge. Meanwhile, Kristi was able to take in-person classes at Mount Marty College and online college courses from the South Dakota State University, eventually earning a BA in political science.  (She was still taking courses when she was in Congress, inspiring the Washington Post to facetiously anoint her Washington’s “most powerful intern.”)

Being head of a large ranching operation, Noem met state agricultural leaders and began to serve on important boards. She has said that she might not have entered politics if her father had lived. Noem was elected to the South Dakota state house in 2006. Four years later she ran for South Dakota’s at-large seat in the U.S House of Representatives, narrowly defeating Democratic incumbent and Georgetown law school grad Stephanie Herseth Sandlin, who was seeking a fourth term and had won previous races handily.

After her first race, Noem won three more terms in Congress and established a reputation for trying to lower taxes, including the estate tax. She cited the effect of the estate taxes on the ranch when her father died. Some critics have tried to discredit Noem, claiming that the estate could have passed to Noem’s mother, the surviving spouse, without estate tax.

“Well, it was a very large operation, so some of it did. But a lot of it didn’t,” says Noem. “At times, the mainstream media has definitely demonized my family,” without, she charges, looking at documents that “have been on file in the county courthouse and show how much taxes we paid and what the impact was for decades.”

In a way, Noem is the anti-Gretchen Whitmer. Whitmer is the Michigan Governor Whitmer, who became famous for her draconian COVID-19 crack-down.

After four terms in Congress, Noem decided it was time to come home. “I realized that in D.C. I can vote, but as the governor, you can set an agenda. You have an opportunity to make a decision and see it implemented on a daily basis.” Noem won the race with 51 percent of the vote. She defeated Billie Sutton, a former bronco rider and popular Democrat.

Like most governors, Noem faced a challenge in the wake of the tragic death of George Floyd in police custody. Noem expressed her support for peaceful protests and said publicly that she was open to changes in policing.  However, as soon as protesters began to throw rocks at the police, Noem called out the National Guard. Because of quick actions, South Dakota got the situation under control.

“Within minutes the National Guard was in downtown Sioux Falls relieving law enforcement,” she says. She stresses that the National Guard “should not be leading these efforts, and so that’s one of the things that we worked with local officials in advance, and they knew what their role was, and that we were going to be right there and be providing that support when it was necessary. And it worked seamlessly in South Dakota and has throughout the last week or so since we’ve been dealing with some of these situations.”

Noem is famous for her South Dakota values, but some political odds makers wonder how, with all that political savvy, it will be possible to keep Kristi Noem down on the ranch.